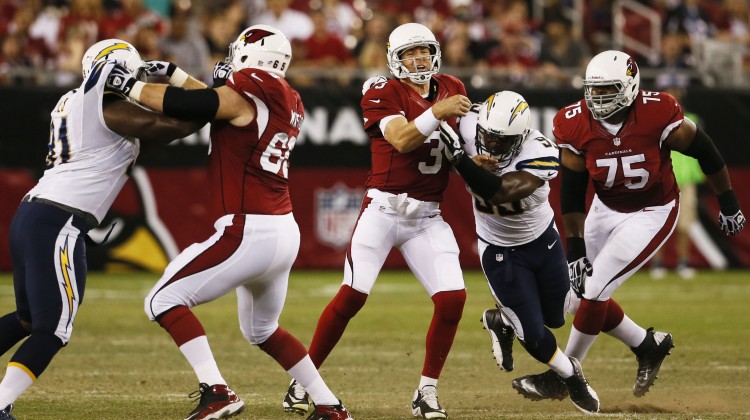 Arizona Cardinals‘ general manager Steve Keim has never been one to walk away from a bargain.

To this point the early returns on veteran signees tight end Jermaine Gresham and running back Chris Johnson have been positive. Keim is hoping for a 2015 trifecta after the team officially announced Tuesday morning they had agreed to terms with seven-time Pro-Bowl defensive end Dwight Freeney on a one-year, $870,000 deal laced with sack incentives.

Keim and head coach Bruce Arians are hopeful the 13-year NFL veteran, who ranks fifth among all active players with 111.5 career sacks, still has some gas left in the tank.

Freeney comes to the desert after spending the last two years with the San Diego Chargers. The former first-round pick and member of the NFL All-Decade team for the 2000s adds depth off the edge for the Cards who will be without outside linebacker Alex Okafor for a month after he sustained a calf injury in Sunday’s win over the Lions.

King believes an outside pass rusher is one of, if not the only thing missing in James Bettcher’s defense which ranks fifth-best in the NFL in points allowed per game (18.0). Freeney’s addition also brings more leadership and another veteran presence to the locker room.

“He didn’t want to go out his last year being borderline ineffective,” King explained. “If Freeney gives them 15-20 snaps per game, that’s a real plus for this defense.”

Freeney will wear jersey #54 with Arizona who are staying in West Virginia this week before their game against the Steelers in Pittsburgh on Sunday.