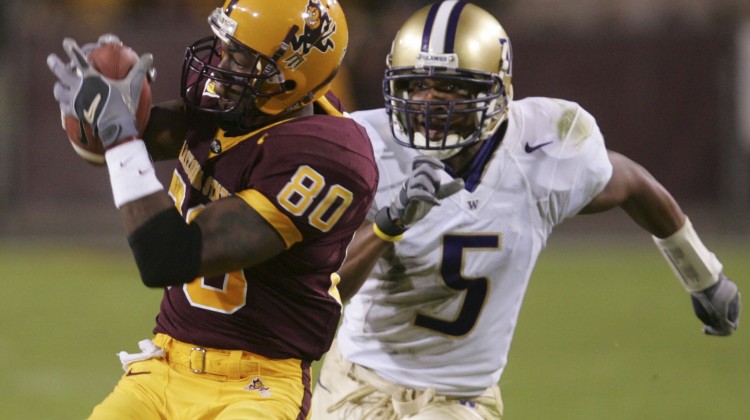 The three letters stand for ‘Embrace The Grind,’ a rallying cry of sorts for Todd Graham’s team.

A decade ago wide receiver Derek Hagan was in the midst of capping off not only a brilliant Sun Devil career, but arguably the best in Pac-12 Conference history. His 50-game resume included 258 catches, 3939 yards and All-American honors his junior and senior seasons when he averaged over 100 yards receiving per game his final two years in Tempe.

As an under-the-radar prospect from Palmdale High School located north of Los Angeles, Hagan ‘Embraced The Grind’ once he stepped foot on campus.

Saturday, at halftime of ASU’s game against Colorado, Hagan will be inducted into the Sun Devil Athletics Hall of Fame.

“Coming out of high school I wasn’t heavily recruited at that time,” Hagan told Sports360AZ.com in a phone interview Thursday morning. “I’m from Palmdale. Just a small town out in California…not too many college coaches recruited out in that area. For myself, I think I was a one-star, two-star recruit but I always felt I was a pretty good player.”

So did (then head coach) Dirk Koetter who offered Hagan a scholarship. The 6’2″, 210-pounder signed with ASU after originally committing to UNLV which at the time was his only other big offer.

“When ASU came around…I was sold,” he explained. “I just felt like home. It felt like the right place to be.”

Hagan parlayed his consistent success at ASU into an eight-year career in the NFL. He isn’t totally ready to call it a career if a team comes calling this fall but has enjoyed post-pro football life working with some of the top high school wide receivers in Southern California.

He still has his finger on the pulse of the ASU program.

“I’m excited,” he explained to Sports360AZ.com. “I’m excited for the university, for this team. Coach Graham is doing an awesome job and hopefully we can just keep it going.”