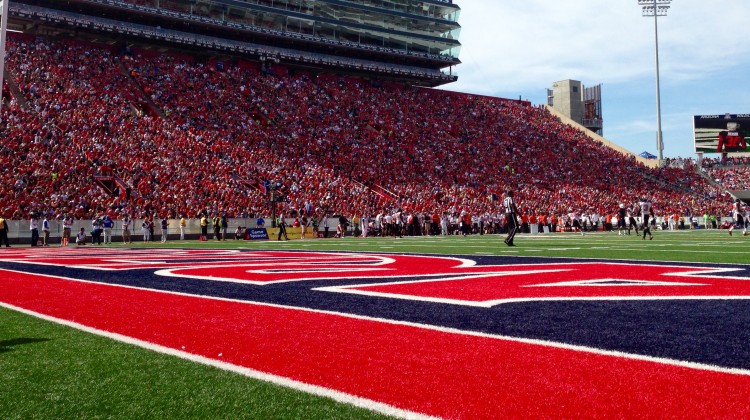 The Arizona Wildcats snapped a two game losing streak on Saturday afternoon as they torched the Oregon State Beavers 44-7 from Arizona Stadium. Here are five things we learned:

Back on track: It has been a tough couple of weeks for Arizona after getting blown out two weeks in a row against UCLA and Stanford. They got back to what they were doing well at the beginning of the season on Saturday as they were efficient on offense, out gaining Oregon State 644-249 in total yards. The Beavers only put together one good scoring drive and struggled just to get into Wildcat territory. The last time Arizona allowed seven points or less against a conference opponent was on October 16, 2010 against Washington State. This was the least amount they have allowed the Beavers to score since 1998.

Magloire galor: The Wildcats have needed someone to step up on defense. The loss of Scooby Wright had been as rough as you could imagine and the Wildcats have needed someone to emerge and be a playmaker. Paul Magloire Jr., playing the linebacker position, was everywhere on Saturday afternoon which was a big part of Arizona’s success in the game. He led the team with nine total tackles and two for a loss. Safety Will Parks continued his solid 2015 campaign as well five total tackles and a monster hit laid on an Oregon State receiver in the second quarter.

Shake n’ Baker: The Wildcats had a scare in the first quarter as stud running back Nick Wilson went down with what appeared to be a right shoulder injury. He would return to the game but Jared Baker did a remarkable job picking up the slack. He had some monster runs and kept the chains moving so that Wilson could just sit the second half out. Baker averaged over 12 yards per carry finishing with a team high 123 yards. Orlando Bradford also picked up the slack adding three touchdowns on the ground. The ground game overall led by Wilson, Baker and Bradford amassed an incredible 368 yards with five touchdowns.

As good as Anu: Arizona’s sophomore quarterback Anu Solomon was back in action after missing last week’s game against Stanford because of a concussion he sustained in the first half against UCLA. When he has been on the field this season, Solomon has been very good. In 145 pass attempts now in five games played, he has yet to throw an interception and has completed 63.4% of his passes. The Wildcats will really need him to stay healthy and on the field if they are going to get themselves back in the the race in the South.

Opportunity ahead: Those two big losses to UCLA and Stanford were deflating but the Wildcats did exactly what they needed to do against a struggling Oregon State team. They got their rhythm back. In looking at the standings, with USC and UCLA losing in the past week, Arizona is just a game out of second in the South. They have have an improved Colorado team in Boulder next week and then Washington State at home before heading west to USC. If the Wildcats continue to take care of business against teams they should beat, they could put themselves right back into the thick of it going into that key game with the Trojans. The biggest key until then? Stay healthy!