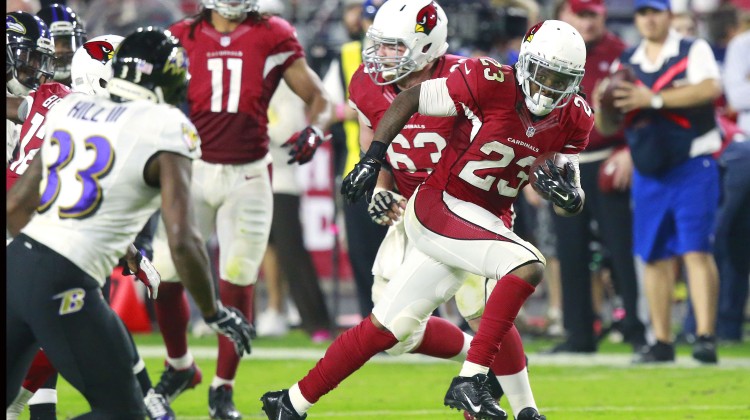 Arizona Cardinals running back Chris Johnson (23) runs for a big gain after the Ravens thought he was down during their NFL game Monday, Oct. 26, 2015 in Glendale, Ariz.

Chris Johnson leaned back in his locker Monday night surrounded by a sea of reporters leaning in closer, hanging on every word.

A year ago Johnson was in some ways forgotten, now he’s a resurrected difference maker in Bruce Arians’ offense after dashing for 122 yards on just 18 carries and a pretty first quarter touchdown in Arizona’s 26-18 win over the Baltimore Ravens in Glendale.

It’s the latest curveball in CJ2K’s life. One which almost ended when he was shot in the shoulder last spring in Florida in an early morning drive-by.

“Johnson has taken a little bit of a re-birth in attitude,” SI.com Senior NFL Writer Peter King told Sports360AZ.com’s Brad Cesmat Tuesday morning. “Everything from his shooting incident in the off-season and from the fact last year he was really not ready to be put out to pasture by the New York Jets.”

His one year stay in New York didn’t end well. A career low in attempts (155), yards (663) and just a single rushing touchdown in 16 games. He was cut in February.

The marriage ended but Johnson eventually found his perfect match, at least through the first half of the season.

Steve Keim and the Cardinals realized that when no other team in the league did.