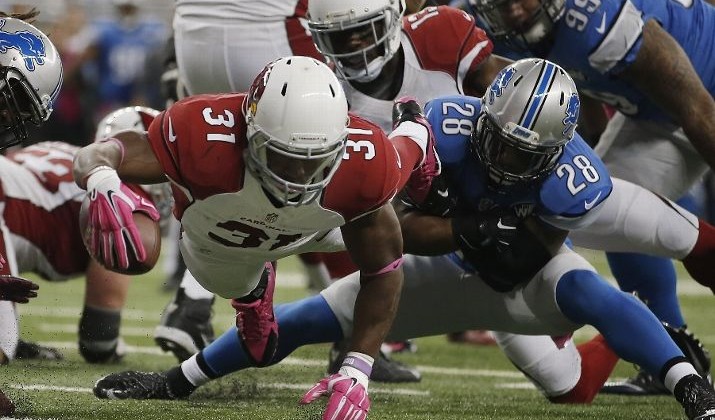 Five takeaways from the Arizona Cardinals 42-17 win at Detroit.

-Easily the biggest story line of this game was how inept Detroit was in taking care of the football. It didn’t matter if it was Lions quarterback Mathew Stafford making careless throws that resulted in two first half interceptions, or two fumbles in the first half. The Cardinals ran only a handful of plays in the first half, yet they led 28-7. Good teams find ways to capitalize on mistakes. The Cardinals had no problem punching the ball into the end zone against Detroit. The Lions had 5 turnovers on 7 possessions with Stafford at quarterback.

-Let’s not kid ourselves, the Cardinals haven’t been known in years past as a running team. The one-two-three punch of Chris Johnson, David Johnson and Andre Ellington was very impressive on Sunday. David Johnson has a knack for finding his way into the end zone in short yardage situations. Chris Johnson cleared 100 yards and Ellington, coming off of an injury, had a touchdown run.

Cory Redding
-The veteran defensive lineman had a second quarter interception return that was really the back breaker of the game. He read Stafford’s eyes and was able to bat the ball in the air and return it 30 yards down to the Detroit 4 yard line. Always fun to see a big man rumble with the football.

-Bruce Arians referred to Larry Fitzgerald, Carson Palmer, and Chris Johnson as the “Fine Wine Crew” this past week. That’s so true. Granted, the Lions were AWFUL, but those three did their jobs very well on Sunday. The Cardinals will stay in the Eastern time zone this week in West Virginia before playing at Pittsburgh