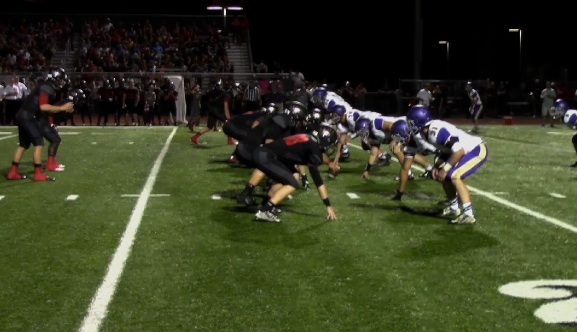 Williams Field entered last Friday’s game versus Queen Creek with 382 passing yards in its previous three games, which is not unusual for a Black Hawks team that rushed for more than 4,600 yards in 2014.

Against the Bulldogs, however, the Black Hawks came out throwing with senior quarterback Weston Murphy a perfect 4-of-4 on the opening drive of the game that ended with a seven-yard touchdown pass to six-foot-one junior receiver Max Fine.

“We wanted to come out and expose the one-on-one coverage,” Murphy told Sports360AZ.com after the game. “We’ve been working hard all year and, not only Max but Justis (too), we clicked. I’m just an average Joe throwing to two great athletes, so it’s definitely nice to air the ball out.”

Murphy almost doubled his season passing totals, throwing for more than 300 yards in the 17 – 14 victory. Most of his completions went to Fine and junior Justis Stokes, who caught the second of Murphy’s two touchdown passes in the game.

“Having Weston back as a senior, his second year as a quarterback, and two very talented wide receivers with Justis and Max is something we need to take advantage of this year,” head coach Steve Campbell said. “So that’s what we’re trying to do.”

Fine and Stokes are the Black Hawks leading receivers so far this season, each now with three touchdown receptions after Friday’s victory.

“The (momentum) was going toward Queen Creek,” Stokes said. “Somebody had to do something to get the momentum changed.”

Murphy, who threw for almost 2,000 yards and 20 touchdowns a year ago, is even better this season, according to his teammates, and is the unquestioned leader of the team.

“Weston’s made a great step from last year to this year,” Fine said. “We’ve all seen it as a team. He’s the leader of our team and we do what he says.”

The Black Hawks didn’t record many rushing attempts last week, primarily the result of their flourishing passing game. Murphy acknowledged the rushing game is still a large part of his team’s offensive attack, but is ready to take advantage of teams that want to crowd the line of scrimmage.

“We definitely didn’t want to shy away from the run by any means – that’s our bread and butter,” he said. “But we definitely want to exploit one-on-one coverage on the outside if we can.”

Friday’s game proved it’s no longer a matter of if they can, instead more like they will which makes the Black Hawks that much more difficult to defend.