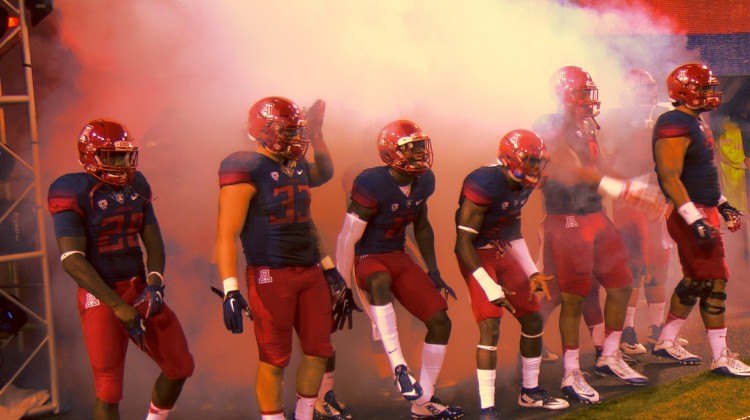 ESPNs popular show, College Gameday, is rolling into Tucson for Saturday night’s 5pm kickoff between the Arizona Wildcats and the UCLA Bruins.
To me, the bigger game is taking place at Sun Devil Stadium(7:30pm kickoff) when Arizona State hosts USC.  It looks as though ASU is starting to work through some things on offense after a couple of body blows in the injury department.  For USC, is the pressure growing on their head coach to win a game? The last time the Trojans came to Tempe, it was the final game for Lane Kiffin as head coach. Could Saturday be the same for Sark?

Todd Graham has never lost to a Steve Sarkisian coached team. I’ve never gotten the sense within the walls of ASU that they fear facing Sark, dating back to his days at Washington.  Mike Bercovici wasn’t afraid to use his legs to make things happen against New Mexico and Demario Richard was terrific on the ground. I think they can do the same against a leaky Trojan defense.

The big question around this game is whether Sarkisian is coaching for his job on Saturday night.  His public display of drunkenness at a booster event before the season coupled with the fact that his team was badly outplayed in last weeks conference opener against Stanford, has some of the big cigars around the USC program more than a little concerned.

In Tucson, this will be the biggest game played for the Arizona football program in many, many years.  Athletic Director Greg Byrne and Rich Rod have tried their hardest to draw attention to football at UofA and now they have the ESPN magnet promoting their brand for a good week.  A win over the Bruins would likely vault the ‘Cats into the top 10 in the rankings and serve notice that they aren’t just something to do until basketball season starts in Tucson.

UCLA gave up 149 yards and 6.5yds per carry to BYU running back Adam Hine last Saturday night.  The Bruins defense can be run on.
Conversely, former Chandler high running back Paul Perkins rolled up 219 yards and a score for the Bruins.  So the question begs, which team will be able to establish the ground game.

It’s great that we have two HUGE games in the state Saturday night, but if I had to get a ticket to one of them, ASU v USC would be the pick for me.