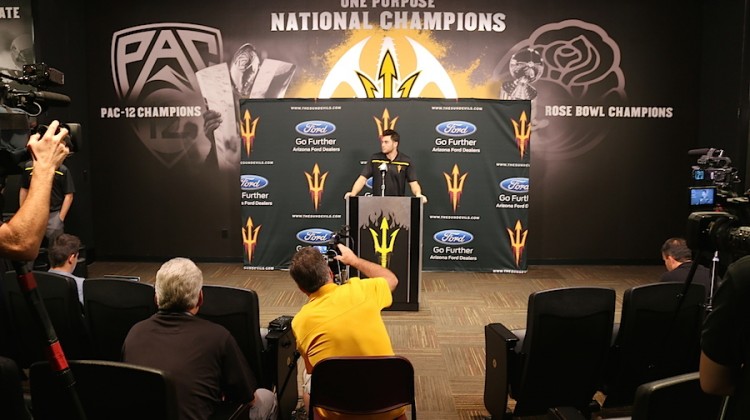 In their weekly press conference, ASU head football coach Todd Graham and quarterback Mike Bercovici recapped their non-conference win over New Mexico and now look to next week where they open up Pac-12 play against USC.

Here are some of the notables from Monday:

Ah, the option offense. ASU had back-to-back weeks having to prepare for that set after going up against Cal Poly and New Mexico.

Todd Graham is not a fan.

His defense suffered some dings, both literally and figuratively, but now they can get back to the offensive stylings of the Trojans, something they are a little bit more familiar with.

Mike Bercovici is not Taylor Kelly.

Berco has a bigger arm and likes to air it out a bit more, but he also isn’t as apt to tuck and run like his predecessor did and did well. Though, early in 2015, Bercovici has been able to use his legs efficiently to pick up two rushing touchdowns in his first three games of the season. Here is Coach Graham on Berco’s running ability:

An emerging playmaker in the Sun Devil offense is wide receiver Tim White. The JUCO transfer provided a spark against Cal Poly, busting off a 59-yard run and adding a receiving touchdown. White followed that up by catching four passes for 42 yards and a touchdown in last week’s win against New Mexico. His QB is impressed with White’s ability to waste no time contributing:

Plenty of questions swirled around the Sun Devils when they went to Los Angeles to take on the Trojans. Can Mike Bercovici play at a consistent level in Pac-12 play? Will the young defense step up after struggling against UCLA the previous week? Can the Devils get a tough Pac-12 win on the road? Many of these were answered after a little play called the Jael Mary happened. Coach Graham recounts what that win meant to his team:

The Sun Devils have had their moments against the Trojans in recent years, whether it be the Vontaze point or the Jael Mary. California-native Mike Bercovici explains what the USC rivalry means to the Sun Devils:

Graham, Bercovici and the rest of the Sun Devils kick off against the Trojans at 7:30 on Saturday at Sun Devil Stadium.