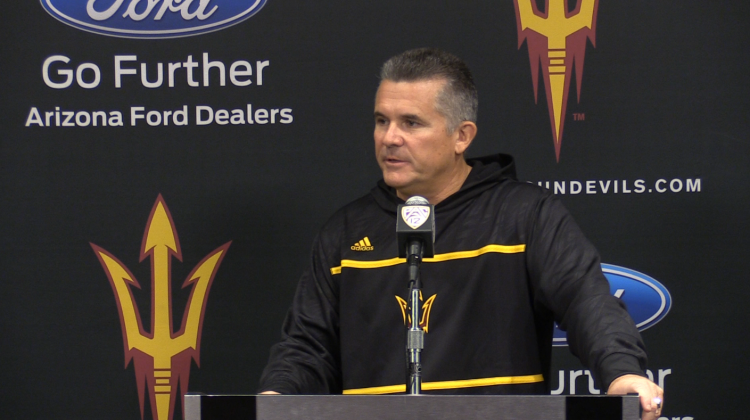 Arizona State struggled against Cal Poly in their 2015 home opener.  The Sun Devils were able to put it together in the fourth quarter and take the game, 35-21.  Head coach Todd Graham and quarterback Mike Bercovici addressed the media Monday in their weekly press conferences, and here are some of the takeaways:

Graham on winning a tough game:

“It’s a win and I will tell you this: it could have been a lot worse.  A lot worse is losing.  It is a positive to face adversity like that and win. You guys know I hate those games because it’s just a very difficult deal.”

“We’ve put the ball in jeopardy more in two games than maybe we did the entire season last year, not just the time we’ve turned it over.  We fumbled the ball five times in the first game, lost it twice.”

“We made so many mistakes with our new receivers with routes, depth of routes.  The first week, we were running into each other.  That’s been a little bit chaotic trying to get all of that cleared up because we didn’t do a lot of that in practice.”

“He’s waited his turn, he’s busted his tail.  He is solid and he is kind of our rudder.  He is a guy that’s pretty steady.  He is a guy who our players listen to.  He’s probably the most vocal leader we’ve had since we’ve been here.”

Bercovici on having Mike Norvell in the booth:

“The communication that I had between him and I was great just being on the headset with him in between series.  So I’m excited moving forward that he is the eye in the sky.”

Bercovici on the identity of the offense:

“We feel we’re the most in-shape in the entire country.   That’s something we take pride in and that’s from the big boys that are 300 pounds to our skinny guys outside and our tough running backs.  Our identity is we play fast, we run the football and you don’t have to trick everybody; we’re just going to go out and make plays.”

Bercovici on the dual Inferno:

“What the capability of that has in the red zone especially is pretty spectacular.  As an offense, you want to score more because you want to see them celebrate.  As a defense you can just turn around and lift your hands a little bit and those guys are going nuts.  If we can get them engaged, it’s going to be a fun season to see whatever they have in store for us.”

The Sun Devils take on New Mexico on Friday in their last game before opening Pac-12 play.