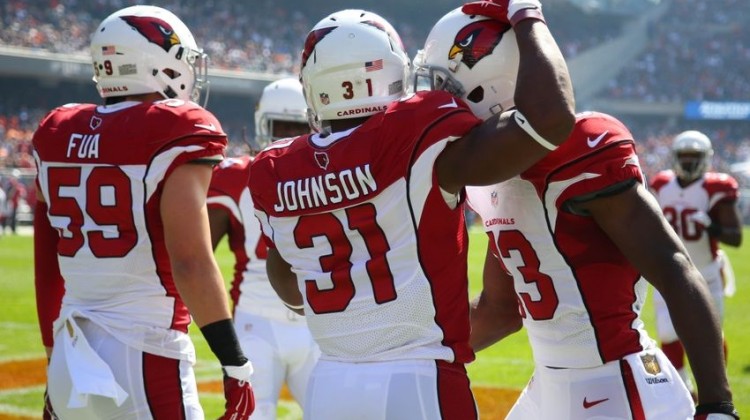 Taking care of business the first two weeks of the season. Nothing surprising about the Cardinals 2-0 start. They were supposed to beat the Saints and bungling Bears. Here are five takeaways from Sundays 48-23 blowout win at Chicago.

1) Laundry service
The Bears found all sorts of ways to screw up. 12 men on the field and two big pass interference calls that led to Cardinals touchdowns. Chicago finished with 14 penalties for 170 yds. The Cardinals took full advantage of all the Bears mistakes. Sloppy, sloppy, sloppy. 1944 was the last time that the Bears had this many flags and yardage thrown on them in a game. Bad team.

2) Palmer to Fitz
After Larry Fitzgerald wasn’t targeted in the first quarter, Carson Palmer found all sorts of ways to get Fitz open, and more importantly, into the end zone. The flea flicker call by Bruce Arians was just another example of how opposing teams have to expect the unexpected when facing Arizona. Fitzgerald would finish as the leading receiver for the day. 5 catches for 112 yards and 3 scores. It was the first time in 9 regular season games that Fitz would find the end zone. It was his first ever 3 TD regular season game.

3) Jared Veldheer=road grader
Go back to the David Johnson TD run in the third quarter and watch Veldheer swallow up a Bear defender. Much was made in August about the Cardinals lack of offensive line stability. The Bears were able to get some hits on Palmer, but they didn’t get one sack on him. Veldheer was terrific. His line mates weren’t bad either. Remember, two starters, Mike Iupati and Bobbie Massie haven’t played yet because of injury and suspension.

4) Early 2015 draft return
OK, not much to say about the first round pick D.J. Humphries other than his unflattering nickname “knee deep”. But just the impact alone of third round pick David Johnson would give GM Steve Keim a high-grade. 2nd round pick Markus Golden picked up his first NFL sack. Johnson set the tone with the opening kickoff return going 108 yards for a score. That was the first kickoff return for a score in 74 games for Arizona. Johnsons 13 yd. TD run was strong.

5) Bring on the 49ers
No reason for the Cardinals to be too high after a 2-0 start. The best teams go right through the weaker competition. I wouldn’t say it was a complete performance by the Cardinals. The Bears offense was able to march up and down the field in the first quarter, before all the mistakes hit. The schedule shows San Francisco and St. Louis at home over the next two weeks. 4-0 looks pretty reasonable. Again, good teams just go one week at a time.