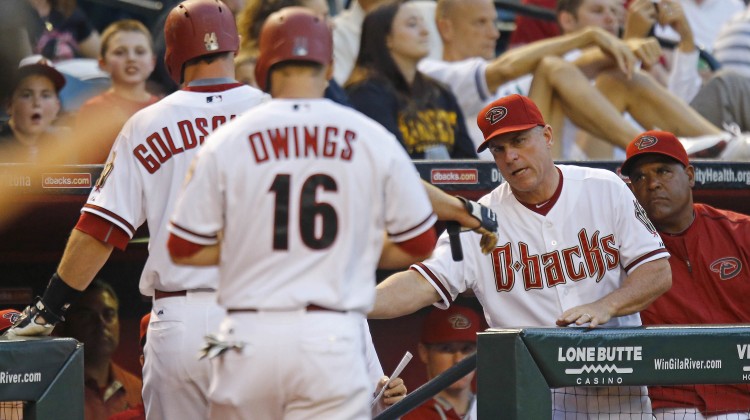 Arizona Diamondbacks' Paul Goldschmidt (44) and Chris Owings are greeted by Arizona Diamondbacks manager Chip Hale (3) after they scored on a triple by Mark Trumbo during the first inning of their MLB game against he Colorado Rockies Tuesday, April 28, 2015 in Phoenix, Ariz.

The Arizona Diamondbacks won’t be competing in the post-season for the fourth consecutive year but no one will argue the fact progress has been made in 2015.

First-year manager Chip Hale has proven to be not only baseball-savvy but a true leader for a club in need of an identity after bottoming out last season under Kirk Gibson.

The D-backs’ improved play has caught the attention of not only national critics and writers but even fellow National League West opponents.

“I actually talked to Bruce Bochy [Tuesday] night who’s probably the best manager in baseball,” ESPN baseball insider Pedro Gomez told Sports360AZ.com’s Brad Cesmat in his weekly interview Wednesday morning. “I said, ‘What do you think about the job the Diamondbacks have done?’ He immediately said ‘Chip’s got them playing and they’re playing hard at the end of the season.'”

Gomez said Bochy believes a club’s effort at the end of the season when the playoffs are no longer an option is one of the biggest aspects when factoring in the progression or regression of a ball club.

“When you’re out of it and you’re still playing hard at the end,” Gomez said. “That speaks volumes. You see a lot of clubs when they’re out of it…they just check out. All they’re doing is waiting for the finish line.”

Bochy told Gomez he thinks Arizona is “not that far away” from contending in the near future which is music to the ears of a fanbase desperate for a winner in the desert.

One area which must be addressed this winter is with the pitching staff, particularly at the top half where the D-backs have struggled with health and consistency over the past few years.

Arizona has already far exceeded their win total from 2014 (64) and continue to rank as one of baseball’s best in several statistical categories including batting average, runs, stolen bases and fielding.

The Diamondbacks wrap up their season this weekend at Chase Field.