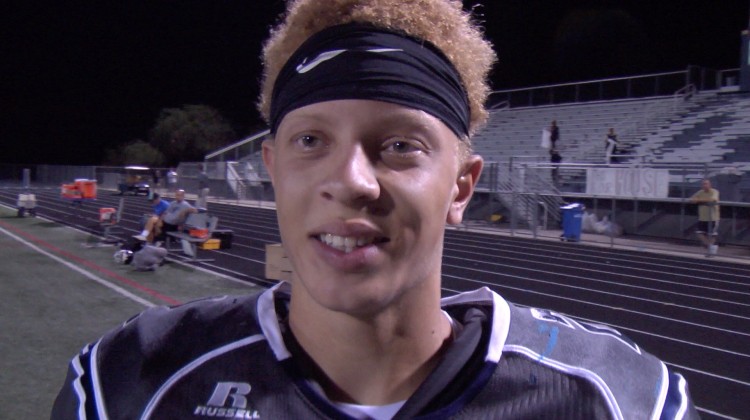 The Pinnacle High School freshman quarterback most certainly had a week to remember.

Recently named the varsity starter the six-foot, 160-pounder was shouldered with the task of not only replacing the greatest player in school history, Michigan State quarterback Brian Lewerke, but also debuting against the defending Division I Champion Chandler Wolves.

It was evident early in CHS’s 56-10 romp the inexperienced Pioneers were no match for Shaun Aguano’s team. However the future appears bright with Rattler in control of the offense for the next four years.

“For all our players, including [Spencer], I think we’ll look back and say, ‘thank you, Chandler,'” Pinnacle head coach Dana Zupke said flashing a wry grin. “For the lesson.”

Zupke’s freshman signal-caller forced some throws and threw three interceptions, one which was returned for the touchdown early in the second half, but he also showed leadership on the field as well as the sideline.

If his confidence was, pardon the pun, rattled he didn’t show it.

“I moved the ball pretty well,”  he told Sports360AZ.com after the game. “Had a couple dumb plays…I’ve just got to move to the next play. Keep playing.”

Due to Chandler’s swarming front Rattler rarely had time to go through his progressions in the pocket. Instead he used his athleticism and quick feet to keep plays alive, even when his initial read was covered.

“Their d-ends were just athletes,” he explained. “They got around the end so I just had to breakout and run.”

“The future’s very bright with him,” Zupke confidently said.

The secret’s out in north Phoenix.