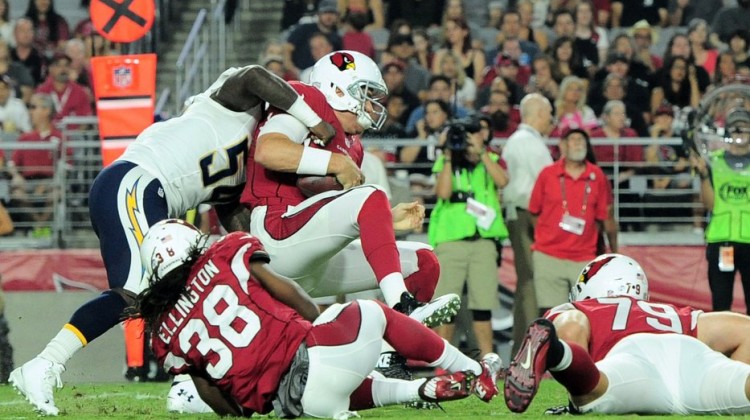 The Arizona Cardinals continued their pre-season tuneup at the University of Phoenix Stadium Saturday night falling 22-19 to the San Diego Chargers on a last-second field goal.

Here are five things we learned from the Cards’ second exhibition game.

1. David’s Debut…head coach Bruce Arians liked what he saw from rookie running back David Johnson. The third-round pick from Northern Iowa made up for lost time last week against Kansas City toting the rock 13 times for a game-high 66 yards (5.1 average). He showed toughness inside running between the tackles and the ability to carry defenders after contact. “I thought after he got out of the dance studio he played really well,” Arians joked referencing Johnson trying to be too cute on certain plays. “Go on ‘Dancing with the Stars’ if you want to dance.” The 6’1, 224-pounder also flashed receiving skills catching two passes for 13 yards and showed no ill-effects from his hamstring injury which has limited his camp time.

2. Speed Kills…Johnson wasn’t the only rookie to impress against San Diego. Wide receiver J.J. Nelson hauled in a 57-yard bomb from Carson Palmer and moments later showed his blazing speed again ripping off an 18-yard punt return. “He displayed the fastest 40 at the [NFL] Combine right there,” Palmer said of the first quarter deep ball.

3. Re-kickulous…more red flags on Arizona’s special teams units from two unlikely sources. The normally reliable Dave Zastudil dropped the snap after the Cards’ first touchdown, then Chandler Catanzaro missed wide right on a 38-yard field goal on Arizona’s opening drive of the third quarter. It must have been something in the air–San Diego’s Nick Novak also found the right upright on an extra point.

4. Pass Pro No Bueno…well, it’s safe to say Palmer knows what it feels like to be hit again. After not being touched last week against the Chiefs the Bolts sacked Palmer twice and the Cardinals’ offensive line struggled with San Diego’s edge rushers in space. Don’t feel too bad for Palmer. Drew Stanton was dropped four times. The most alarming: all were before halftime. “I liked the way we started except the mental errors which led to sacks,” Arians said. Rookie D.J. Humphries, who hasn’t drawn anything close to rave reviews from Arians, struggled getting beat off the edge. “Bad technique, bad effort,” the head coach bluntly explained. “Simple as that.”

5. Backup Plan…last week Logan Thomas showed promise. Saturday it was rookie Phillip Sims’ turn, showing patience in the pocket and working through his progressions. He finished 8-13 for 82 yards, receiving praise from his head coach. “I thought he had a really, really good fourth quarter.” It’s possible Sims could be kept on the practice squad heading into the season.”