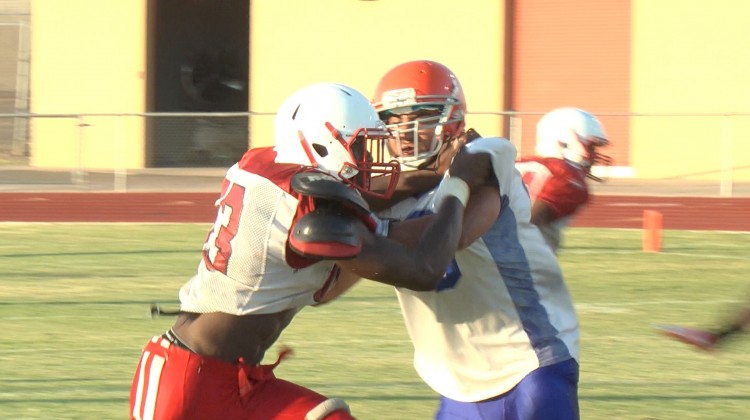 Azur Kamara probably doesn’t realize how talented he is.

But his head coach sure does.

If you haven’t heard Kamara’s name around the high school football circles, you will. 6’4, 220-pound athletes who run 4.6 40’s aren’t exactly commonplace. His journey to the United States is as unique as his transition football.

“I was born and raised in Africa,” the soft-spoken Kamara explained to Sports360AZ.com. “I came here about six years ago. I started playing football my freshman year.”

That’s when he first met Clanton. The former Centennial High School star who played for the University of Nebraska in the 2002 BCS National Championship Game and has infused a new, hard-working attitude in the downtown-based school.

“He’s a good player,” Clanton said of his starting offensive tackle and defensive end. “He’s put on about 15 pounds in the last year. He’s gotten a lot faster…he’s a man among boys at practice.”

Kamara is also on opposing head coaches’ radars. It’s not uncommon for the chiseled, long-strider to chase down backs on running plays to the opposite side of the field or even wide receivers after big gains. His modest 2014 stats (43 tackles, four sacks) don’t tell the story of his dominance.

“Coaches are coming up to him after the game shaking his hand, telling him how good he’s playing.” his head coach explained.

Kamara’s quick feet can partly be attributed to soccer where he plays forward on the Bobcats’ varsity squad. His sport beyond high school is likely football where he already holds offers from Adams State and Glendale Community College. The list could grow considerably with a strong senior season this fall. He performed extremely well against some of the state’s top players at the University of Arizona’s summer camp.

Throughout the recruiting process he’s gotten some sage advice from his head coach on and off the field.

“He’s tells me to keep my grades up, that’s the first thing,” Kamara told Sports360AZ.com flashing a big smile. “Stay out of trouble and keep doing what I’m doing. I’ll get there.”