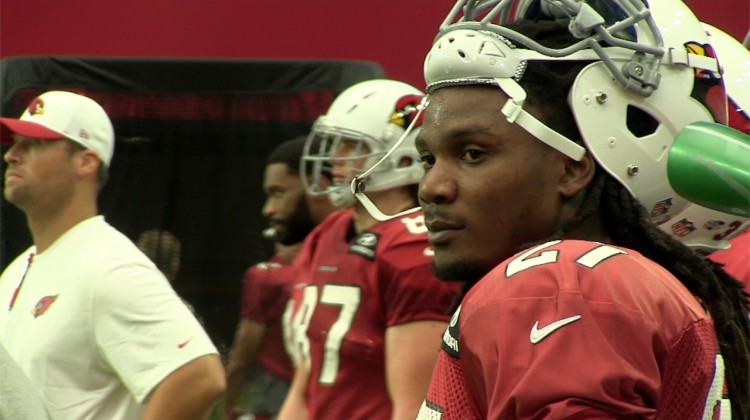 Former 2,000 yard rusher Chris Johnson is officially a Cardinal and the new number 27 in your programs.

A player who become one of the elite running backs in the league with the Tennessee Titans from 2008 to 2013.  But after one season with the New York Jets in 2014 in which it was reported that his role with the team was in question, he opted out of his contract this offseason and became a free agent.

As camps got underway around the NFL, Johnson took his time to find the best fit. He was ok with waiting and being patient but that patience started to wear off as the preseason games got underway last week. As a result, he picked the one that made the most sense for him which was Arizona.

“I felt like this was a good situation for me,” said Chris Johnson on Tuesday. “A team that’s been winning, going to the playoffs. I just feel like this is the right choice.”

From a personnel stand point when Johnson dove into what the Cardinals had to offer and why it seemed to be a good fit, he notices things the team brings to the table offensively that he has not had at points in his career.

“Coming here and looking at their offense, they have great guys on the outside,” Johnson explained. “They spread the field and have a quarterback that can get it down the field. My whole career, I’ve been dealing with having eight or nine in the box and not having a quarterback like Carson (Palmer) and receivers like this that can stretch the field for me.”

“He’s a home run every time he touches the ball, he’s one of those guys who makes you hold your breath,” Cardinals head coach Bruce Arians said of Johnson. “I like what I saw on tape last year. I’ve seen him many, many years in a row. We will judge that on the field.”

“I don’t have to worry about just being a power back and run over eight, nine guys in the box,” Johnson added. “I think it will work out great. Me running again, catching balls out of the backfield, screen plays and all that.”

From the Cardinals perspective, Johnson is someone they’ve had on their radar for a while. Not just over the last few weeks which have seen multiple running backs go down with injuries during camp. As players like Andre Ellington and David Johnson get back healthy, Arians does not see there being an issue of Johnson wanting to be the guy.

“(Cardinals assistant) Tom Moore was with him in Tennessee and loved the kid,” mentioned Arians. “As I’ve put it to Jermaine (Gresham) and to Chris, you’re not promised anything other than a roster spot if you make the team. You’ve got to make the team and we will define your role based on what you do on the field.”

“Thats cool with me,” Johnson stated. “When he first called me and we talked and I told B.A., I said ‘I don’t want you to promise me anything or anything like that. I want to come in and work for whatever my role is and whatever you all need me to do. I am just glad to be back playing football and be ready to go.”

One of the most incredible notes about Johnson is the fact that in his career, which began in 2008 in Tennessee, he has not missed a game with an injury. Extremely rare with the running back position and especially with noting with the amount of injuries that the Cardinals have already seen this preseason.

“It’s just how I work out,” he mentioned. “There is nobody that can say I don’t work hard. I’ve worked hard all offseason, continue to eat right, and God number one. I am just fortunate to have not yet missed a game.”

Johnson was involved in a life altering situation over the summer. While in Orlando, Florida, he was shot and wounded in a drive-by shooting which killed the driver of the car he was in and wounded another passenger. Johnson explained all he worked through to get back into position to re-join an NFL team.

“Working out helped me out a lot with that,” Johnson explained. “When that first happened, I was on bed rest for six weeks, I lost 20 to 25 pounds. But then I went out to L.A., started working out with Jay Glazer and worked out every day. Sometimes twice a day and it just helped me.”

Johnson went on to explain that he did nothing but work on his legs and hips for the first few weeks when he showed up to workout with the sling still on to support his shoulder. The whole situation he found himself in has changed his outlook on his career and on life.

“Yeah it changes how you look at life,” Johnson said. “Sometimes you’ve just got to live life and not worry about those days so much. And when you’ve been given a chance to play in the NFL you make it even better.”

Johnson now with the Cardinals is working himself into game shape and hopes to be on the field for a game as soon as possible. The team is back in action for preseason game number two on Saturday against the San Diego Chargers from University of Phoenix Stadium.