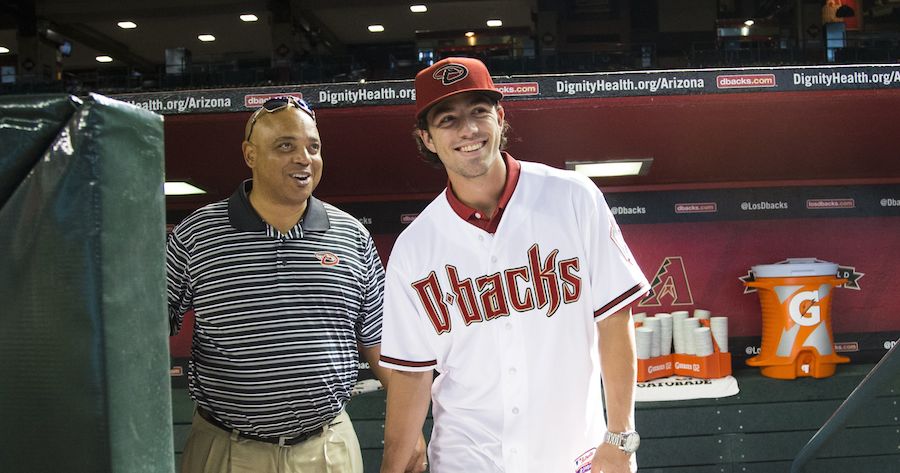 There was a glimpse at the future in Chase Field Monday afternoon.

Top pick Dansby Swanson, fresh off his newly signed contract, visited Chase Field to meet with the team and Phoenix media, just a few days after negotiations went up until the signing deadline on Friday afternoon.

Despite the deal being signed in the 11th hour, Swanson wasn’t concerned.

“I had faith in the deal. It was a matter of when it was going to happen and not if.”

Swanson said the plan is for the shortstop to head to Visalia to play with the Advanced-A Rawhide.

So now the real work begins.  Swanson brings an above average bat that can hit for power occasionally and defensive versatility.  He was a shortstop in his junior year, but played second base on the Vanderbilt College World Series Champion team in 2014.

And he doesn’t mind moving around the diamond.

“If you’re in the big leagues and you’re playing every day, it doesn’t matter where you’re at.”

The trip also included dinner with some members of the Diamondbacks’ front office including Tony La Russa and De Jon Watson.  Typically, a top pick would take batting practice with a big league club when visiting, but Swanson did not.  He explains why in this video from CBS 5’s Mark McClune:

#Dbacks #1 pick Dansby Swanson on why he chose not to take batting practice today at Chase Field pic.twitter.com/tM2qhc1WKX

While Swanson tried not to be a distraction in his first visit to Chase, all eyes will be on him as he makes his way to be a full-time fixture on the field in the coming years.