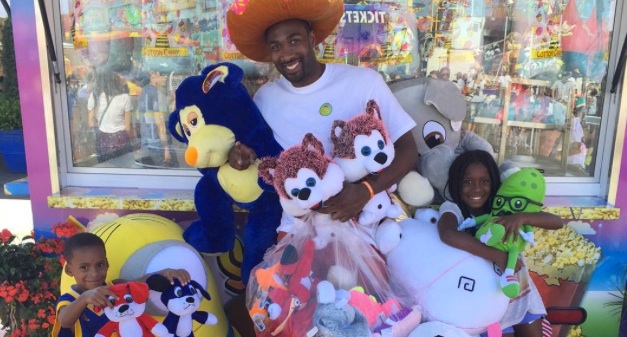 The Fair has always suckered us into thinking our basketball shots are on point until a large stuffed animal is on the line and all of a sudden our game goes to crap. One person that does not face that dilemma however is Gilbert Arenas.

It seems Agent Zero is still as much of a cold blooded sharp shooter as he ever was as the former Arizona Wildcats standout and three-time NBA All-Star took his kids to the Orange County Fair over the weekend where he decided to take some shots at the basketball hoop carnival game to win his kids some stuffed animals. In the end, Arenas landed himself his kids’ birthday and Christmas presents for the rest of the year.

Arenas owned the carnival game and got himself banned from the fair because it seems they had no more stuffed animals for other future contestants.

Hibachi was what he would yell in games while in the NBA when he was starting to get hot. He was clearly hot on this day as a couple of his kids look like the are disappearing in this photo he posted behind all of those stuffed animals. Some of which bigger than his kids.

So in the end, score one for us guys who have tried to impress their girlfriends, wives or kids and have failed miserably because those hoops have to be rigged. Arenas shoved it right back in their face representing us all who have had our egos shot over the years.