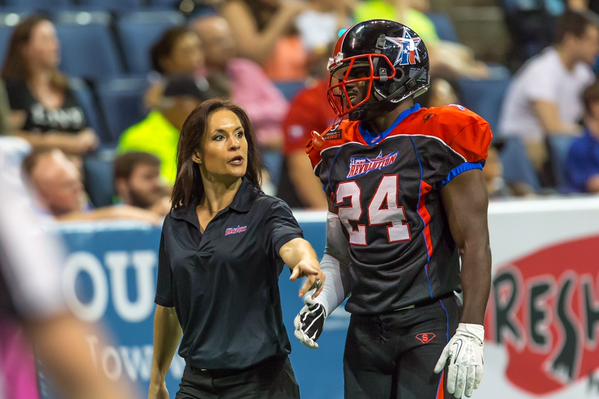 The Arizona Cardinals made an announcement on what could be a groundbreaking occurrence in NFL history. They have named 37 year-old Jen Welter to their coaching staff for training camp and the preseason to work with the inside linebackers. It is believed that Welter will become the first female to hold a coaching position of any kind in the NFL.

I’m honored to be part of the #BIRDGANG! Love the #footballfamily here with the #ArizonaCardinals #NFL… http://t.co/vPdmyKH2hi

Welter is no stranger to firsts in the world of football.

In 2014, Welter became the first woman to play men’s professional football as Running-Back (non-kicker/ place-holder) for the Indoor Football League’s Texas Revolution. According to her website, jenwelter.com, she not only took some major hits, but further, she popped right back up and asked “Is that all you’ve got?”

Check out video of her action on the football field:

For the 2015 season, Welter made history again by rejoining the Texas Revolution becoming a member of their coaching staff, and becoming the first female coach in Men’s Professional football coaching linebackers and special teams.In that role she worked under Revolution general manager and 2015 Pro Football Hall of Fame inductee Tim Brown.

Welter is a former rugby player at Boston College and has more than 14 years of professional football experience as a linebacker, mostly with the Dallas Diamonds of the Women’s Football Alliance, helping them win four championships. She also earned two gold medals with Team USA at the International Federation of American Football (IFAF) Women’s World Championship in 2010 and 2013.

Her true title is Dr. Jen Welter as she holds a master’s degree in sport psychology and a PhD in psychology.

Here is a feature on Welter that she had on NBC’s Today Show”:

Visit NBCNews.com for breaking news, world news, and news about the economy