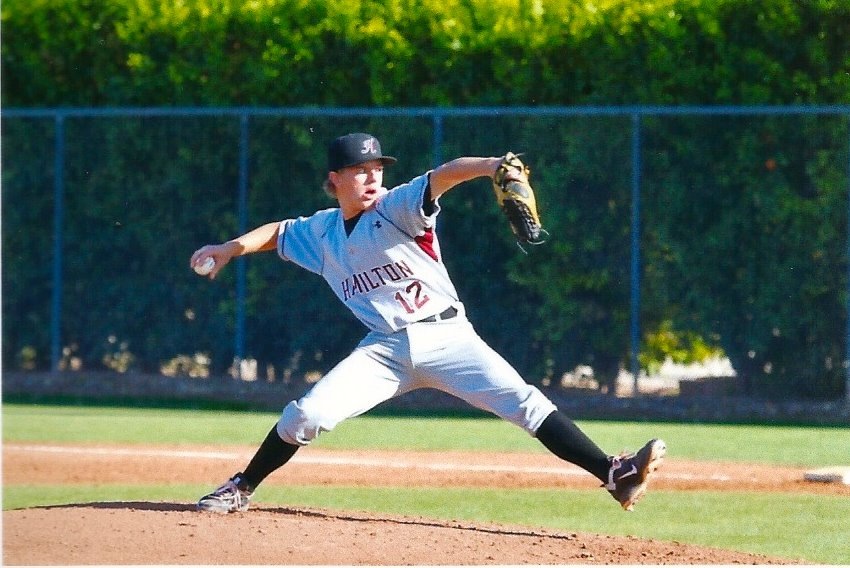 Pitcher Kent Hasler’s journey has brought him a state championship, a recruiting process that found him at Mesa Community College, and now Canada.

Hasler is one of the most decorated pitchers ever at Hamilton High School, but his baseball story didn’t start on the mound, but behind the dish.

“When he first was in the program, he was as a catcher. I didn’t take notice of his pithing prowress until sophomore year at some bullpens and thought, ‘He has a live arm,'” Hamilton Head Baseball Coach Mike Woods said.

Hasler had a chance to show off that live arm in a tournament when he was called up as a sophomore. After a few injuries on the team, he found himself on the varsity roster to end the year.

“I had not put a great deal thought into (playing varsity) as a sophomore. My plan was to play JV ball and make my way up the ladder. When they called up with an opportunity and say he we would like you to help us out now, I was able to answer that call and did what I could to help,” Hasler said.

Hasler helped, and Woods expected him to be a “serviceable” option in his junior year. Though, he never expected what Hasler had in store for his season. As the staff ace, he struck out 57 in as many innings and recorded a 1.94 earned run average – a school record.

And he wasn’t done.

“It wasn’t so much added pressure, it was I knew I still had more in the tank to give and I knew I had set the bar high and needed to continue to improve. There were no real numbers set out for me. It was more I knew what I had to do and I had my own personal goals I had to work on,” Hasler said.

His record didn’t last long because Hasler broke it again as a senior with a 1.59 ERA. It wasn’t just the personal accolades for him, though. He helped set up Hamilton for a playoff run in 2014.

“He pitched a gem against Chaparral in the semifinals, which is a very good ball club.  He pitched on a Thursday and he said, ‘Coach I can pitch on Tuesday,’” Woods said. “We don’t try to turn our guys around that quick.   We will go with Zach Peterson. If and when he needed help, you’ll be there.”

When the Huskies eventually won the title, the dog pile converged on Hasler.

“There were a couple older guys I would have loved to get a ring with, but (our team) had all grown close. Winning it with them was really special.”

Despite the impressive showing for over two seasons, Hasler’s recruitment was slow. Woods said Hasler’s size (5’10) and velocity (86 mph) were deterents for the big Division-I programs. Hasler eventually found a home at Mesa Community College. Woods said the recruitment process added a chip on Hasler’s shoulder, and the landing spot will be good for Hasler in the long run as Hasler was able to start in his freshman year and gain valuable experience.

”I think he made a good decision in waiting I think he will be better later on,” Woods said.

Hasler wasted no time showing he could pitch at the next level: in 12 starts, he struck out 80 batters and had a 3.35 ERA. He also used this year to develop his mind while on the mound.

“(I) learned to fix myself, being able to listen to the signs your body is giving you and to learn on the fly,” Hasler said. “I just try to make (hitters) get themselves out.”

This summer, Hasler is playing in the Western Major League Baseball League in Canada. Hasler is using this as an opportunity to adjust his game to a more diverse set of competition.

“With having such a wide net, you are getting variety of talent and wide variety of skills that you’re playing against and playing with,” Hasler said.  “It really shows that if you want to keep playing and keep doing well and keep moving up, it shows you how much more you have to work.

When speaking to Hasler, you hear a soft-spoken, humble, team-oriented man. The priority for has always been getting wins. Coach Woods references him as an “All-American boy” has a mentality fit for a time decades ago.

“He’s like a player from 1965 or something. He’s an old school kid. You talk to him and you feel like your talking to a kid from a 1950 sports novel.”

As if it were straight out of “Field of Dreams”, Hasler makes a transformation when he steps on the field; a transformation from that “All-American boy” to a relentless surgeon who bludgeons the strike zone.

“He is a very nice, quiet young man. I didn’t notice (his demeanor) because I know that Kent. When I went and saw him as a JV picher, I saw on the mound and he is the bull dog. His temperament, his body langue- everything changes. I love that. A lot of kids can throw with velocity and have a nice breaking ball, but he has that demeanor”.

That demeanor has made Hasler a pitcher, an ace, a college starter, and will continue to drive his success whether he is that All-American boy or the bulldog making hitters get themselves out.