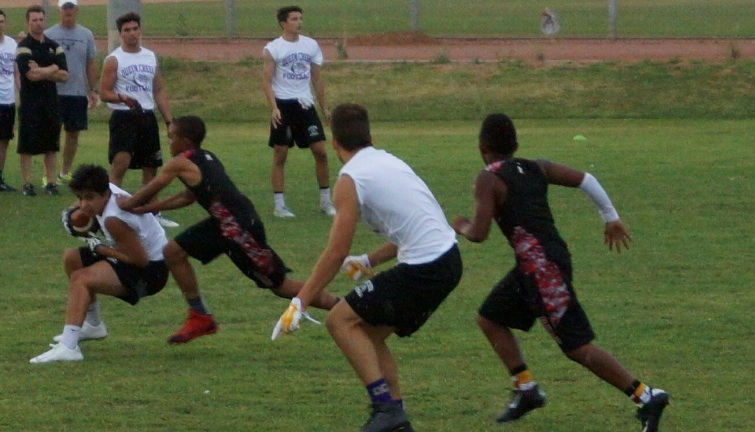 Thursday marked the opening of the 16-team Campo Verde passing league where teams begin the process of preparing for the 2015 season, which is fewer than 80 days away.

The significance of passing leagues is known to differ among coaches, but most agree that at least a couple benefits include the opportunity for their players to compete and give great effort – two things needed for success in the fall.

“We want to see them compete, fly around, play at a high level, and see their confidence build,” new Casa Grande head coach Jake Barro told Sports360AZ.com. “We got to see that today.”

According to Barro, the Cougars are competing in a 7-on-7 league for the first time. He knows these competitions are important to having success on Friday nights, but he also believes they help the development of team camaraderie.

“One of the biggest things about doing (seven on seven) is coming together as a team,” Barro said. “We start with lifting in the spring, then we do passing leagues, we go up to camp in July, and it’s in stages that once we get to August it’s a family – their brothers.”

For other teams like Queen Creek – perennially a rushing powerhouse – passing leagues give coaches a glimpse of players who can make plays when the Bulldogs do throw the ball.

“We want to find out what our identity is going to be in the passing game,” Queen Creek assistant coach Joe Germaine said. “And maybe find out who are the guys that are going to take that next step to separate themselves from others.”

Coaches want their teams to execute with precision. Passing leagues allows players to work on route running and timing, both key elements to having success throwing the ball.

“Hopefully (better execution) comes with more repetition and more opportunities,” Germaine said. “The fact that this was our first chance to come out and go against someone else, we can walk away feeling decent about what we did.”

Passing leagues aren’t just about the offensive side of the ball. Learning to defend the pass is just as important, especially when facing teams with high-octane offenses.

Higley, one of the 16 teams in the Campo Verde league, will give the other teams here plenty of chances to improve defensively. The Knights looked like a well-oiled offensive machine during Thursday’s games with junior Mason Crossland as the triggerman.

Queen Creek will have a new starting quarterback in 2015. Senior Zane Whiting made several nice throws, including a long touchdown completion to junior receiver Armon McGuire, who looks like he could be a playmaker on offense.

“I thought we improved throughout the day as a team,” Whiting said after Thursday’s final game. “We did well for our first time out.”

The Bulldogs are returning four starting defensive backs from a year ago, each of them seniors. All of Queen Creek’s defensive backs were ballhawks on Thursday, picking off at least six passes during the evening and five in the last three games.

Kaleb Honea, one of the four returning starters, had one of the Bulldogs’ interceptions off a deflected pass. He also threw a touchdown pass to tight end Jordan Ackert.

“I was pleased,” Germaine said of the Bulldogs’ effort. “I felt that there was a lot of emphasis on offense and defense where we did compete. Our players were in position to make a play and (they did), so that was a real positive.”

Casa Grande started the evening off like a deer caught in the headlights but improved as it played more games. By the time the Cougar’s’ final game rolled around two juniors – quarterback Brock Hall and receiver Trevor Russell – stood out, looking like a duo that could wreak some havoc in Division IV this season. Barro expected a strong performance by Hall and Russell but admitted he was surprised by the play of another group.

“Those two guys were real big today,” he said. “Our linebackers came out today, flew around, and did a heck of job. That is what I was most impressed with – our linebackers.”

Perhaps the most anticipated matchup on Thursday was Higley versus Queen Creek. It was definitely the most spirited contest, as evidenced by the chippy play throughout.

Higley looked as explosive as ever. The Knights, who figure to do well in passing leagues with their style of offense, were clicking on all cylinders against Queen Creek. Crossland threw an interception on his second pass of the game but rebounded to throw two of the Knights’ three touchdowns against the Bulldogs.

“We’ve been doing great as a team,” Crossland said. “This is the most energized our team has been in Higley’s history. Our offense is what it normally is – high-speed and scoring points – and our defense is coming through.”

The Campo Verde passing league will continue with games each Thursday throughout the month of June. A big man competition is scheduled for June 18.