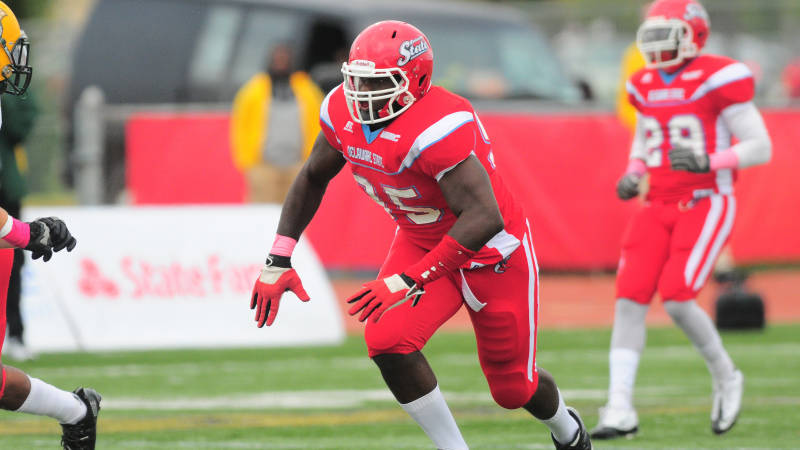 The Arizona Cardinals had four picks on the third and final day of the draft. Here is a quick synopsis of each plus video highlights and quotes from General Manager Steve Keim and Head Coach Bruce Arians on each of them.

“We added several players who are passionate and are going to be great for our locker room,” said Keim of his 2015 draft class. “At the same time we added some guys who you probably don’t know a whole lot about. But we see a tremendous amount of upside. Coach says all the time, ‘No risk it, no biscuit.’ And I don’t think it’s a secret in this room that I like biscuits.”

Gunter is the second small school player the Cardinals drafted in 2015 who stands 6-5, 305 pounds. He is a raw player but is said to have displayed some superb athleticism. Was a second-team All-MEAC selection in 2014, a first-team All-MEAC pick in 2013. At his pro day, he ran the forty yard dash in five seconds flat and did 20 reps of 225 on the bench. With the departure of Dan Williams and Darnell Dockett this offseason, Gunter could be a big piece for the Cardinals future on the defensive line.

“Gunter is a guy who can play all three positions,” said Arians. “He’s a five (technique), he’s a three, he’s a nose. We ail find a spot because of his explosiveness.”

Cardinals scouts absolutely raved about Gunter’s athletic ability after hosting a workout involving him and other players.

About 17 hours before being selected to the Cardinals, Riddick tweeted this:

I will terrorize QBs

That is what the Cardinals want to hear as they continue to address the need for pass rushers in this draft. First adding Markus Golden in the second round and now with Riddick. He transferred from Gardner-Webb to West Virginia in 2014 which saw his production at the mid-major level decline a bit playing in the Big 12. But his size and speed jumps off the page for the Cardinals. He is 6-6 and ran a 4.65 forty at his pro day. If he can continue to develop strength and power to go with his size and speed, he could have the makeup to be a playmaker in the Cardinals 3-4 defense. He said after he was selected by the Cardinals that he has already added 15 pounds since his pro day.

“Riddick is a long, tall pass rusher,” explained Arians. “I can see Markus Golden sitting at Sam (linebacker) and him sitting at Will coming off the open side and Markus beating the $#*! out of tight ends and Riddick coming off the strong side. They are two great young opposite outside backers.”

“We got longer and more athletic defensively,” stated Keim. “So when you are going against the Kaepernicks’ and the Russell Wilsons’ who have perimeter skills and feet, now you have long, athletic defenders who are long and cover ground which is huge.”

For the second year in a row, the Cardinals add a lightning fast small school receiver. Last year it was John Brown, this year it’s J.J. Nelson from Alabama-Birmingham.  In 2014, Nelson had 35 catches, 655 yards, 4 TDs but it was on kick returns where Nelson displayed his next level ability. He had 22 KO returns for 843 yards (38.3-yard average) and returned four for score. At the combine, he ran a 4.28 forty yard dash but reportedly at his pro day, he ran a 4.21. His size could present an issue in terms of blocking on offense but could be an effective slot receiver for the Arians deep ball routes that we saw Brown do so effectively and in critical moments last season. Arians believes Nelson will be up to 175 pounds before they even get to training camp and has a great story of the first time he saw the young UAB receiver run.

“It’s funny because I was at a track meet five or four years ago for the Alabama state championship,” Arians recalled. “My granddaughter was running in it. And this kid from Midfield won the 100, 200, 400, 4X100. A little skinny dude and I looked at my son and said ‘who in the hell is that?’ It just happened to be J.J. Nelson.”

Mike Mayock of the NFL Network said Christian is anything but Mr. Irrelevant as the last pick of the NFL Draft. The 6-3, 244 tight end was Third-team All-ACC in 2014 and played in all 13 games with 11 starts. He believe it or not was projected to go higher in the draft than both of the Cardinals fifth round picks via the NFL Network. The Cardinals drafted Troy Niklas last season who they hope to take over the starting role this season and Christian could have a very good opportunity to make the team as a back-up tight end. But the Cardinals more so see him playing as an H-back. As you see in the video below, he has good blocking ability which Arians will undoubtedly love. They also love his ability to be a playmaker on special teams.

“Pretty neat story there,” said Keim of Christian. “Great character kid. A guy we think has a great opportunity to make our football team.”