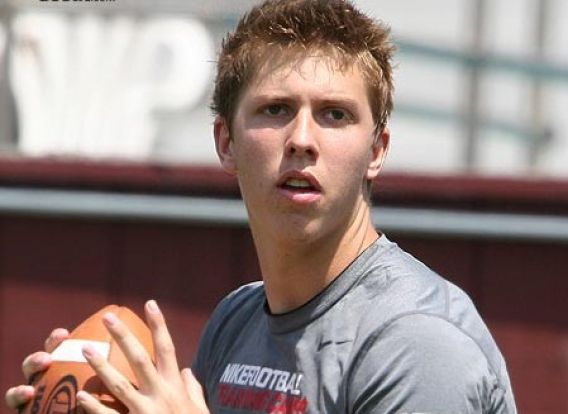 After a standout career at Chaparral high school, quarterback Connor Brewer has not yet found his home at the next level. After initially going to Texas, he transferred to Arizona but after one season as a back-up with the Wildcats, that wasn’t the place for him either.

With two years left to play and his bachelors degree already in hand. Brewer knew what he needed to focus on this time around which made committed to Northern Arizona University on Thursday morning an easier process for him.

“This time around, it was a little easier just because I made the path I needed to go,” Connor Brewer told the Brad Cesmat Show shortly after his announcement. “At this point in my career I just need to get out on the field and start playing right away. That’s been a big factor. When the bigger schools would call and ask to take official visits, I really wasn’t entertaining that too much because I knew I needed to get out on the field and didn’t want to do the same thing I’ve done the last couple of places I went.”

“I am excited to now go to NAU and start this new journey,” he added. “And hopefully get on the field and start winning some games.”

Brewer transferred back to his home state to play for Arizona with the hopes of coming in right away and being the starter. Despite the team success for the Wildcats in 2014, individually it was a frustrating season.

“After playing a lot in high school and then going to college and not playing a lot, any season is a hard one,” explained Brewer. “You are kind of sitting there, wanting to get out and thinking you could do something for the team…but I think I am in a good place with the coaches at NAU, they have a great coaching staff.”

After announcing he was going to be leaving Tucson, many schools expressed interest. Going back to Texas was reportedly an option. There was also interest from a powerhouse like Alabama in the last week as well as North Carolina among others. But the big school thing was just not something that was on Brewer’s radar this time.

“I wasn’t really thinking big schools much,” he added. “I’ve already been there, done that. NAU was just a perfect fit, it’s close to home with great coaches, great atmosphere. It’s everything I wanted.”

So what makes Jerome Souers NAU the perfect fit for Brewer? What sold him?

“Really the coaches,” he answered. “They were on me each and every day of every week just checking in on me if there was anything I needed…To me, NAU is just a genuine program, obviously it’s a great chance for me to play right away…I went out and saw them practice once and to me, I think they could hold there own with a good amount of Pac-12 teams being on the sidelines from last year.”

In addition, if there is one position that looks like it could compete with any, it’s the wide receiving core they have coming in 2015. That would make any quarterback’s eyes light up.

“They told me about the wide receivers like who they are, how they got there and the different situations they were in,” mentioned Brewer. “To me it looks like a Pac-12 receiving core. Being at Arizona, there were obviously some great receivers here, I am not trying to compare it, but NAU has some great receivers and I think pretty much all of them can play in the Pac-12.”

With all this being said, there is no guarantee that Brewer is being named the starter the minute he steps foot on campus in Flagstaff. He knows this and is eager to compete.

“I don’t want a guarantee,” he said. “I want to go somewhere where I can compete. If I am not the best, I won’t play, if I am, it’s great to play. I am going to go in there as hard as I can, work my butt off in the film room and on the field and just try to play my best.”

Brewer committing to NAU now means he will have a nice little reunion set up for September 19th, 2015 when the Lumberjacks head to Tucson to play the Wildcats.

“I have looked at that date a couple times,” he mentioned. “I am really excited, I think it’s a great opportunity for me and for NAU to play a big powerhouse school, the defending Pac-12 South Champs. I feel good. I have been practicing against them for a long time now and I am excited to get out there and show them what I can do.”

With that being said, Brewer still has a lot of respect for Rich Rodriguez, his former high school coach and now U of A assistant Charlie Ragle for how they have helped him to this point and through this process.

“Both of them have been a big part in my growing and everything like that in college so I definitely have a lot of respect for them,” Brewer explained. “I am excited to hopefully play against them.”