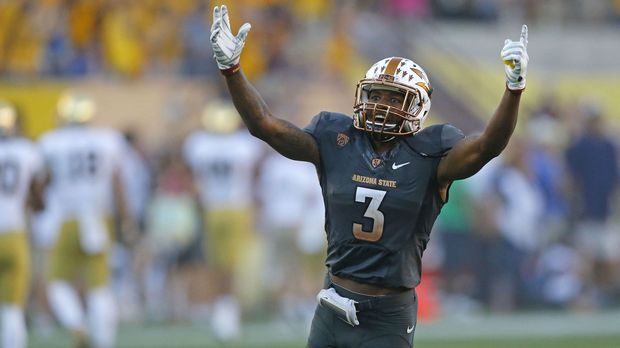 The 2015 NFL Draft is just weeks away and as players continue to meet and have workouts with teams, analysts and insiders continue to have sources tell them how much stock in certain players are rising and falling.

These days it seems like any time someone mentions the name Damarious Randall, people’s eyes begin to light up or words can’t speak enough of how well he has been doing through this process.

At the 2015 NFL Scouting Combine, Randall was either third or tied for third amongst all safeties in most major measuring categories including the 40 yard dash (4.46 seconds), three cone (6.83 seconds), 20 yard shuttle (4.07 seconds) and vertical (38 inches).

After being an all-conference perfumer in his second year after being a JUCO transfer to ASU, Randall decided the winter and spring was his time to really show what he is made off and it has really paid off.

One person in which Randall’s work this spring has jumped off the page for NFL Network Draft Analyst Mike Mayock who held a teleconference Thursday with media leading up to the draft. He ventured to say that Randall has played himself into being the top safety in this draft.

“The first safety off the board is going to be, in my opinion, Damarious Randall from Arizona State, and he’s by far the best cover safety in this draft,” Mayock stated.  “Two months ago he was considered a third or fourth round pick. Now he’s a first round pick.”

“We know Randall is rising,” Fox Sports College Analyst Charles Davis added to Brad Cesmat and Sports360AZ earlier this week. “My colleague, who is the face of our draft coverage on NFL Network Mike Mayock, has moved him to his number one safety. He has those man-to-man coverage skills that are big time.”

Analysist’s are not just the only people who are publicly singing the praises of Randall leading up to the draft. On Wednesday, Arizona Cardinals General Manager Steve Keim was specifically asked about Randall.

“His strength could be his versatility,” stated Keim. “He can play inside, he can play out, he can play nickel. We think he could be a perimeter corner for you.”

“The testing this spring was outstanding,” he added. “His movement skills, his athleticism, he is a physical player for his size, he is a really good tackler in space. So he is a guy that we really like.”

The Cardinals have put versatile safeties to good use like what we have seen out of Tyrann Mathieu and Deonne Bucannon. Might adding Randall to an already versatile secondary be an enticing option?

If things hold true to what Mayock is saying of Randall, he might not even make it to 24. The Eagles, Bengals and Steelers pick 20-22 in the first round and all have glaring needs at safety.

There is the definite possibility that both Randall and wide receiver Jaelen Strong being selected in the first round of the draft. The last time that was the case for ASU players was 2001 when Adam Archuleta was selected 20th and Todd Heap 31st. It also happened in 1988 with Randall McDaniel and Aaron Cox as well as 1976 with Mike Haynes and Larry Gordon.