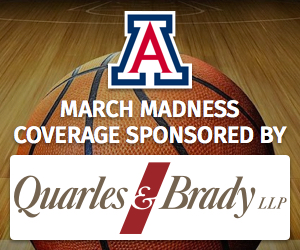 T.J. MCConnell had a game changing stretch where he made a lay up and then stole the inbound pass which led to a three. That five point swing jump started the Arizona program.
McConnell finished with 15-points, 5-rebounds, 5-assists, and 5-steals. The 6th person to do that in NCAA History.

missed some easy shots early, but as the game progressed the defense by Arizona left him flustered. He finished a woeful 3-19 from the floor and the slick passing disappeared in the second half.

Up Next-The Wildcats will travel to LA and will play Xavier. Time and date are yet to be announced.