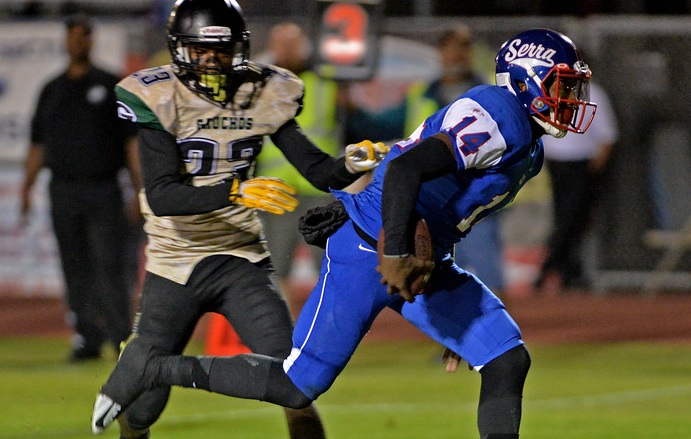 Rich Rodriguez has always preached that he will recruit the players that fits his system or as he puts it, “our kind of guys.” This has remained the case during his tenure with the Arizona Wildcats as has snatched players who are not necessarily the most heralded or players who the conventional coach might believe will not be a “next level” player at the position they compete at in high school.

Coach Rod knows what he wants in his quarterbacks and has a different eye for the intangibles needed than most coaches around the country. It is for that reason that the Wildcats landed one of the best all-around 2016 prospects in Southern California, Khalil Tate.

Thanks everyone involved in my decision,I've decided to COMMIT to the UNIVERSITY OF ARIZONA to play QB ?❤️? #BearDown pic.twitter.com/kMFHGP69KH

Tate is the quarterback for Serra High School and is coming off of a season where he threw for over 1,300 yards and rushed for over 1,200 leading the Cavaliers to an 8-3 record. Recruiting sites and evaluators have given him the athlete tag, he has the speed and athleticism to play multiple positions so him being a major division I athlete was never in question. Ultimately what stood out about Arizona, they would like to give him a shot at being a quarterback at the next level unlike most the schools that were recruiting him.

“I want to play quarterback in college,” Tate told Greg Biggins of Scout.com. “I visited Arizona last year spring with my Team 19 7v7 team and loved it there. I love the coaches, the campus and everything about the school. I love the offense and it really fits me well too.”

“When I got the offer from Arizona awhile back, my coach, Scott Altenberg, told me our offense is a lot like theirs and ever since then, I started visualizing myself playing for UA,” he added to Biggins. “Coach Rich Rod is an offensive genius and great with quarterbacks. I have a great relationship with Coach Dews and Coach Smith too and like I said, it’s just a great fit for me.”

Tate had a total of 15 offers which included most Pac-12 schools as well as Nebraska, Florida State and Texas A&M. Serra High School has produced a lot of players who have gone on to USC which include now NFL standouts Marquis Lee and Robert Woods just to name a couple.

Tate mentioned that there is a notion that if you are good at Serra, the place to end up is USC. But like Rich Rod being different in his approach to his kind of guys, Tate had the same mentality which make them what hopes to be an ideal match at the next level.