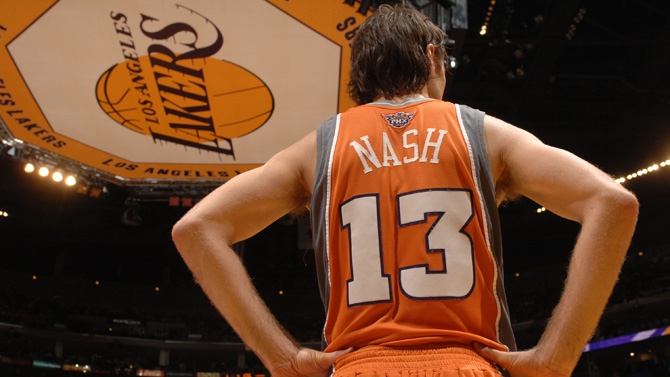 With Steve Nash’s retirement announcement comes plenty of memories of 100-point games, plays that will make you questions physics, and hair so good, you would think it you are watching the most sports-friendly shampoo commercial you’ve ever seen.   He is someone the Suns drafted, and the fanbase gravitated to. He was traded to Dallas, but returned to his NBA home for the prime of his career.  For years, Suns fans got to watch Nash zig and zag through defenses, never killing his dribble, and his wheels turn like that of a chess master, always being a few steps ahead of the defense…and sometimes his own team as well.

One of the first memories that come to mind when thinking of Nash was actually his second departure from Phoenix.  It came on the Independence Day, 2012.  I was in New York for the summer interning for CNBC.  We returned from Coney Island, and had just climbed up a friend’s fire escape to watch the upcoming fireworks (I know, how “New York” of us).  The trade was made, and twitter exploded.  One of the first thoughts I had once it sank in was, “NOW the Suns are rebuilding”.  Stars had come and gone in the past few years, and the Suns roster didn’t have the same name recognition it once had with Amar’e Stoudamire and Shawn Marion, but they were still supposed to be competitive, in my mind, as long as Nash was at the helm.

There’s plenty of reasons to think fondly of the “Nash Rambler”, and here are some of the things he accomplished and the attributes that made him the perfect fit for Phoenix:

Nash Put Arizona Back On The Sports Map

As a teenager growing up in the Valley in 2004, being a sports fan was be pretty bleak. The Diamondbacks were far from their World Series roster in 2001, winning just 51 games and cemented in the cellar of the National League West. The Cardinals, while having nice receivers in Anquan Boldin and Larry Fitzgerald, were sporting a 6-10 record under Dennis Green, and the then-Glendale Arena was left dormant during the NHL lockout.

The Suns, however, had some hope. There was young Amar’e Stoudemire, coming off his second season, where he averaged nearly 21 points and nine rebounds per game. The versatile Shawn Marion was showing off his pogo stick leaps and was already an NBA All-Star. Head coach Mike D’Antoni was coming off his first season with the Suns, proving they could put up big scoring numbers, but only won 29 games. In his first offseason, he needed an orchestrator of the “Seven Seconds Or Less” offense.

Steve Nash was that person.

Not only did Nash nab two NBA MVP awards in his tenure with the Suns, but he also brought Phoenix to the forefront of the NBA landscape almost instantly. The Suns were the top seed in the Western Conference in Nash’s first season returning from the Dallas Mavericks, and they were a team that could burn up the nets as often as an expert player on NBA Jams. Of Nash’s eight seasons in Phoenix, the Suns led the NBA in scoring five times.

With Nash as the catalyst, the scoring erupted, the crowds grew, and Phoenix became a destination for veterans like Grant Hill and Kurt Thomas to become assets in the latter parts of their careers, bringing in quality players at discounted prices to play with the mastermind of the up-tempo offense.

The picture says it all.

In the 2007 Western Conference Finals, Nash and Spurs guard Tony Parker collided. While Parker was being tended to on the court, Nash found his way to the bench, seemingly unphased by the gushing amounts of blood coming from the bridge of his nose. The only angst from Nash seemed to be that he had to sit out in a crucial part of a crucial series against the evil empire of the Spurs.

Even as Nash’s career progressed and he was far from the young, spry Santa Clara point guard the Suns drafted the first time around, he constantly fought off injuries, bounced back up instantly after careening of opposing big men, and a endured a fateful hip check from Robert Horry.   In his second stint with the Suns, he averaged 75 games per season.   The Suns training staff deserves credit for their part in keeping Nash on the floor, but ultimately Nash proved his toughness each and every game, as he would lay on the floor rather than sit on the bench to aid a sore back.

When thinking of Nash’s career, one of the first things that comes to mind is one of his funnier “injuries”. In a 2007 December bout against the Utah Jazz, Nash was on the business end of a Carlos Boozer elbow before halftime. The rest is, well, just take a look:

Nash also had some entertaining…acting roles?

The allure of Nash wasn’t just alley-oops and three-pointers. He had a personality. He had interests outside of basketball. His love of art, soccer, and his family just added to his likeability.

Nash’s career with Phoenix reinvigorated the Valley sports scene and the state as a whole.  Since his departure. the current Suns continue to garner and cultivate a young roster that is continuing to formulate it’s identity.