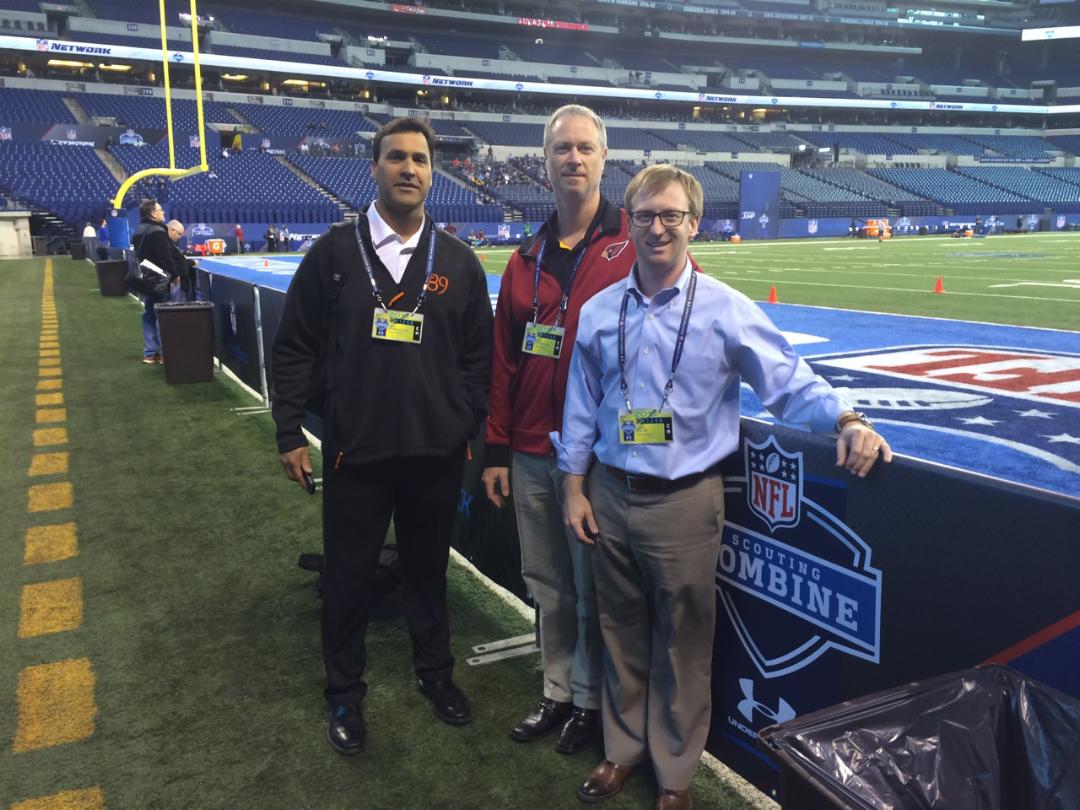 The nation’s top college football players were showing off their skills at the NFL Scouting Combine in Indianapolis, Indiana.

During the week of Feb. 17-23, more than 300 college athletes, eligible for the upcoming NFL Draft, were being evaluated by all 32 NFL teams on whether they have what it takes to play at the top level.

Several things are taken into consideration from benching 225 pounds until exhaustion to running their personal best in the 40-yard dash.

A week long of events that began with medical exams by a variety of health professionals.

Waslewski gave us a rundown of some of the things they got to do during the combine.

I understand you were part of a large team of physicians giving orthopedic and medical exams to more than 300 draft prospects at the NFL Scouting Combine. Please explain your role?

At every NFL Combine we take an injury history, perform a physical exam and review imaging (xrays/CTs/MRIs/bone scans and nerve conduction studies) on every one of the roughly 350 athletes over four days. Immediately after seeing each player we need to dictate an exhaustive note (draft is still months away and every detail needs to be presented to the decision makers when the time comes). We create an individual medical grade which is essentially a risk assessment for each player. Not really different than what a doctor who performs life insurance physicals would do, except in this case we need to understand how the body must stand up to the varying rigors of each position as opposed to football in general. This is an eight hour day in itself.

At night we have medical conferences with presentations from team physicians about their football specific research, interesting “cases” that occurred during the past year and how that team handled the issue and presentations from special interest committees made up of members of NFLTPS (NFL team physician society) researching specific topics over time such as concussions, shoe/cleat mechanics and medication usage.

We also have presentations on “hot topics” like PRP or stem cells. The entire health of the athlete, medical, orthopedic and psychological components of performance as well as short term and long term player health and safety are discussed.

How many times have you and the other physicians from OrthoArizona-Arizona Sports Medicine Center been to the NFL Scouting Combine? How have things changed over the years?

This is our 7th year- the format is always the same but we are able to accumulate more detailed and more complete player injury information due to additions such as the electronic medical records system which helps in better tracking the severity of injuries, recovery time and recurrences or residual problems over career and hopefully post career.

What advice would you give to the athletes as they put their body through such a demanding process at the NFL Scouting Combine?

The best advice for the player /athlete is to embrace the process and try to enjoy the camaraderie of hanging out for a few days with the other “best of the best”. Remember they have two, three and even four years of “tape” showing they deserve to be here in Indianapolis and subsequently the NFL so this experience is not going to “make or break” them.

How many professional teams do you provide orthopedic care?

I take care of the NFL Arizona Cardinals, NHL Arizona Coyotes and I am also head team physician of the Arizona Diamondbacks this year after spending the last nine years working with the San Francisco Giants (three World Series rings) and the Chicago Cubs.

Each sport has its differences-often major differences such as how you would treat a hockey player with an elbow strain vs a Major League Baseball pitcher – dramatically different.

I feel that I have somewhat of an advantage over other surgeons in that not only did I play Division I sports in college (baseball at Princeton University) and had to struggle with the frustration and performance impairment due to both acute and overuse injury, but also my father was a major league baseball player so I have seen the time and physical commitment (time away from family, etc) expected and demanded of professional athletes.
It’s not always the most athletic or most talented athlete that makes it to the pros, you need to have both obviously, but it is frequently the athlete with the most mental toughness. That is not something you can measure with a stopwatch or an MRI.