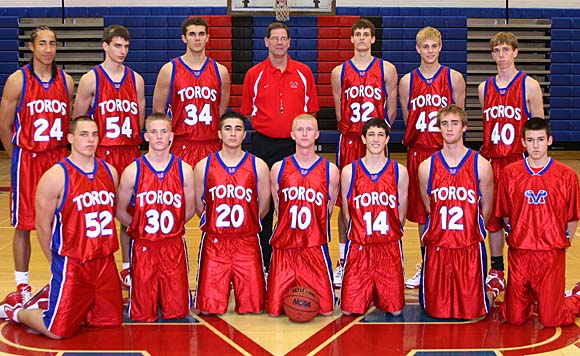 Sometimes a single play can change the course of history.

As the 2005 state semi-final basketball game wound down to the final seconds, the Mountain View Toros stood on the precipice of defeat. The game was tied and Deer Valley was holding the ball as the clock wound down, looking to knock down the game’s final shot. 10 years later Mountain View coach Gary Ernst still remembers vividly what happened next.

“They tried to use a ball screen at the last moment,” Ernst told Sports360AZ.com. “But Harper (Kamp) jumped the screen, stole the ball, and that sent the game into overtime.”

Kamp’s play saved the Toro’s season and as it turned out, began one of the greatest runs in Arizona high school basketball history. Mountain View would win the contest in overtime, defeat St. Mary’s for the championship in the following game and go on to win the title in 2006 and 2007 as well, becoming the first Arizona big school to win three state titles in a row in 46 years. The play which helped them get there was, in many ways, representative of exactly what those Toro teams were; hard-working, defensive minded, with a very high basketball IQ.

“Here’s a sophomore making that play in that moment,” said Ernst. “But it wasn’t unexpected. Harper was so smart that he could anticipate what was going to happen.”

The calling card for the three state championship teams was sacrifice. Team first was stressed to everyone, with the younger players following the example set by the seniors, and star players giving up statistical potential for the good of the group. Ernst notes that a unique aspect of the group was that the star players bought in to the concept.

“Harper could’ve chosen to be selfish and average 30 points a game,” said Ernst. “But I didn’t want that and neither did he because he knew that wouldn’t necessarily give us the best chance at the ultimate goal.”

The key to that team first-style was born in the 2005 season. Kamp and guard Kendall Wallace were sophomores and both were clearly talented players. The pair would go on to play at Cal and UNLV respectively after high school. But instead of becoming the focus of the team, the two deferred in both leadership and play to a solid group of seniors that included Tim Coons, Ethan Dick, and David Burrows, as well as junior Stephen Rogers.

“My sophomore year was about developing my own role and earning the trust of the underclassmen,” Wallace explained to Sports360AZ.com. “We had a really awesome group of seniors who taught us to always play for our teammates, never for ourselves.”

It’s a philosophy that many teams strive for but that can also be hard to come by in the world of youth basketball. Ernst always pushed the idea of team first, to outwork teams with defense, and that the squad would always be better spreading the ball out instead of stars padding their stats. Talented young players always put the team ahead of themselves, beginning with Kamp and Wallace, and continuing with guard Brendan Lavender, who arrived on the team in 2006 and went on to play at the University of Arizona.

“The greatest credit I could give those kids is they were all team players in an era of people wanting to be the star,” said Ernst. “They were believers in what we were doing and the value of spreading the ball. That particular group was very mature for their age.”

None of the three championship teams ever had an undefeated season and losses in the first two years served to never make the team complacent. Wallace recalls one loss from 2005 in particular, to Dobson right before the playoffs. It was the team’s only loss that year.

“I remember walking into the locker room and seeing guys in tears after,” said Wallace. “We couldn’t believe we’d lost and it really lit a fire in us. You obviously never want to lose, but the losses always put us on notice that we could be beat.”

For the 2007 title, the history at stake made it clear motivation was never going to be an issue. No big school had won three straight since Phoenix Union in 1961.

“They were very committed that year,” said Ernst. “I think they realized that this would be pretty cool if we could win three in a row.”

The team achieved said history by beating St. Mary’s in the 2007 title game. Remembering the moment, Wallace admitted it was hard to find words for what he felt.

“It was bittersweet,” he said. “It was hard knowing this was the last time we were all going to play together. But we also knew we’d accomplished everything we wanted to.”

The team is now back in the public eye after the success of Corona during the last few seasons. The Aztecs last season became the only team since Mountain View to win three straight championships and they are favored to win a fourth straight this season. Ernst says that although they are around decade apart, he sees similarities between this Corona team and his Mountain View three-peat teams.

“I think these Corona teams are a lot like our teams that won state,” said Ernst. “Their star players have been very unselfish and been about playing team ball.”

A picture of the third Mountain View title team hangs just outside of Ernst’s office today and he is well aware of what a special group the 2005 to 2007 teams were.

“When you first start out you think, it could be so cool to just win one,” said Ernst. “And to think I was lucky enough to coach that group of kids and win three in a row, when it’s so hard to win just one. It’s really like a dream come true.”

“Family,” said Wallace, when asked to describe what those teams had meant to him. “We were like a brotherhood.”