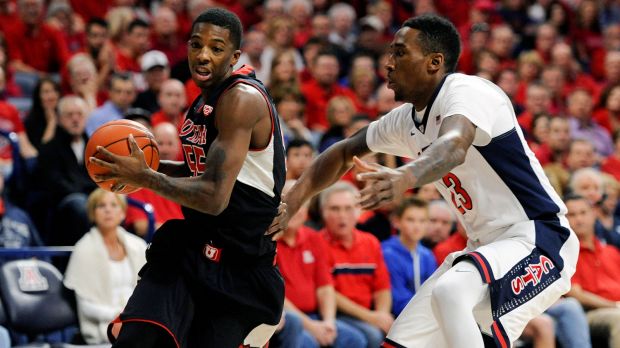 Often as basketball fans we pigeon-hole the premier players to be elite scorers or guys that make highlight reel plays.

People are so quick to mention the offensive accolades of the greats whether at the NCAA or even NBA level. But how often when talking about players like Michael Jordan, Kobe Bryant, Kevin Garnett or Gary Payton do you mention that all four have been named All-Defense first team a record nine times? Hardly ever.

How often when people think of the great San Antonio Spurs teams that got in the way of the Phoenix Suns winning their first title during the Steve Nash era talk about how vital a player like Bruce Bowen was on defense? Also, hardly ever.

As fans we may not look at that, but college coaches as well as NBA general managers and scouts undoubtedly do.

Insert Arizona sophomore forward Rondae Hollis-Jefferson. A player with elite athleticism but when people look at the box scores of games, at different times this year they may notice he isn’t in the top three or four in scoring in the game for his team. Automatically people assume, well then there is no way he deserves to be a first round draft pick!

Jay Bilas joined ‘The Brad Cesmat Show’ back in January and summed up how people need to look at Hollis-Jefferson and why in fact he is one of the most important players on the Wildcats roster and how he is going to be a huge asset to an NBA team when he leaves Arizona.

“One of the things you have to look at in the NBA is, can they fill a certain role as maybe a specialist?” he explained. “Specialists can make a lot of money and have really long careers. Rondae Hollis-Jefferson is going to be a specialist. He’s the type of guy you can put on the floor in the NBA and he guard multiple positions and impact the game on the defensive end without really having to score. He will be a valuable piece to a really good team in the NBA.”

It’s one thing for a coach, scout or advisor of some sort to say this to Rondae, it’s another for him to believe it. It just so happens to be something he has known about himself for a long, long time.

“For a lot of players, it takes them a while to find out what they are good at or what they should focus on,” Hollis-Jefferson explained. “It just so happened that I found it early and I’m just taking it and running with it.”

So what makes Hollis-Jefferson so unique and “a specialist” in the eye of people at the NBA level? He has shown time and time again that he can guard just about anyone on the floor. He has guarded the post against power forwards all the way up to the smallest and fastest players on the court that play point guard.

Hollis-Jefferson acknowledges a difference on what it takes to be successful in guarding such different types of players.

“They are a lot stronger, a lot bigger, I am not an average four size so they kind of have a lot more weight on them than me,” he mentioned in regards to guarding a post forward. “With that I just outsmart them. I am two-steps ahead of them. I just kind of know what they are going to do before they do it. I just work harder than them.”

His length along with his athleticism has given him a gift to do something really few have been able to do on the basketball court successfully. Keeping it local, Shawn Marion one time in a playoff series against the Dallas Mavericks while with the Suns guarded Devin Harris, a point guard and then Dirk Nowitzki, a seven-foot power forward in the same game. There are a lot of parallels to Hollis-Jefferson and Marion based on their intangibles. Athleticism, leaping ability, un-orthodox offensive styles and of course, their ability to defend. Marion is a prime example of the type of specialist that Jay Bilas alludes to.

His talent and ability to do this is one that even has his own teammates in awe.

“I don’t think there is word to describe how Rondae has played,” stated senior Point Guard T.J. McConnell. “To put it into perspective for you, he needs to learn three positions in practice every day and he guards the team’s best player no matter the size. You know, one through four. And I have never see a player do what he has done this year. It’s been remarkable.”

“Seeing him guard a one and then switching to guard a four, it just shows how tough his night can be defensively,” he mentioned. “He rises to the challenge every time and when he comes out of the game for a minute and I have to guard his man, he walks by me and is like ‘if this guy scores, I’m going to kill you.’ So that kind of puts pressure on me.”

Hollis-Jefferson leads Arizona with an average of 1.0 blocks per game this season and blocking a team-best 4.0 percent of opponents’ two-point shots while on the floor. In 61-career games, he has blocked 62 shots and led the Wildcats in blocks 30 times. Arizona is 8-0 in his career and 5-0 this season when Hollis-Jefferson records at least three blocks or at least three steals in a game.

His outlook on the game is very refreshing in a day in age where you see so much more one-on-one play and less effort at the AAU and high school levels on the defensive end. His role has been vital to the Arizona Wildcats defense which has forced opponents to score less than 80 points in  66 of its last 68 games. 34 of those opponents failed to reach 60 points.

Hollis-Jefferson and the Wildcats look to get back on track this week on the road against the Washington schools.