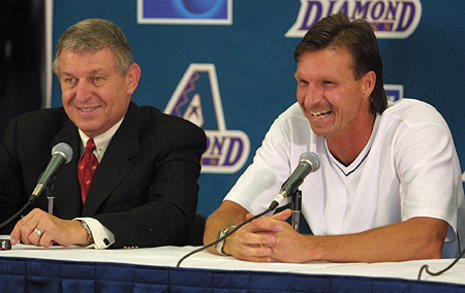 Without Jerry Colangelo there would be no Arizona Diamondbacks.

It’s no wonder the man who wooed “The Big Unit” to the new-born franchise back in 1999 smiled like a proud father when it was announced Tuesday afternoon Johnson was a member of the 2015 National Baseball Hall of Fame class.

Colangelo took some time Wednesday morning to talk about how their unique friendship and was born well over 15 years ago.

“We related to one another,” Colangelo told Sports360AZ.com in a phone interview. “There was a trust between players and myself because the various roles in sports that I had played…we hit it off well. I had great respect for him. As strong as of a competitor as I’ve ever seen in sports…I couldn’t be more proud of him.”

At the time Johnson signed, the Diamondbacks were in the infancy of their existence just coming off their first full season. A year which they nearly lost 100 games (97) under manager Buck Showalter.

Colangelo shrewdly used one of his pro franchises at the time to ultimately help benefit the other.

“His agents called me and said Randy was building a home in Phoenix and Randy wanted Suns season tickets..on the floor,” he explained. “We were just getting started as a baseball franchise and were still a couple of years away from reality. I accommodated him but I told his agent, ‘now you owe me something.'”

“A couple of years go by and now he’s a free agent so I called the agent and said, ‘here’s what I would like. I want to be the first one in to meet with him and his family and his agents, but also the last one out.’ In other words, two bites of the apple.”

“Randy was the premiere free-agent out there and many of the skeptics said it was too big a contract, he was too old, he wasn’t going to last,” he lamented. “He proved everyone so wrong it was unbelievable.”

Five things that ASU hoops needs to improve to get back on track: