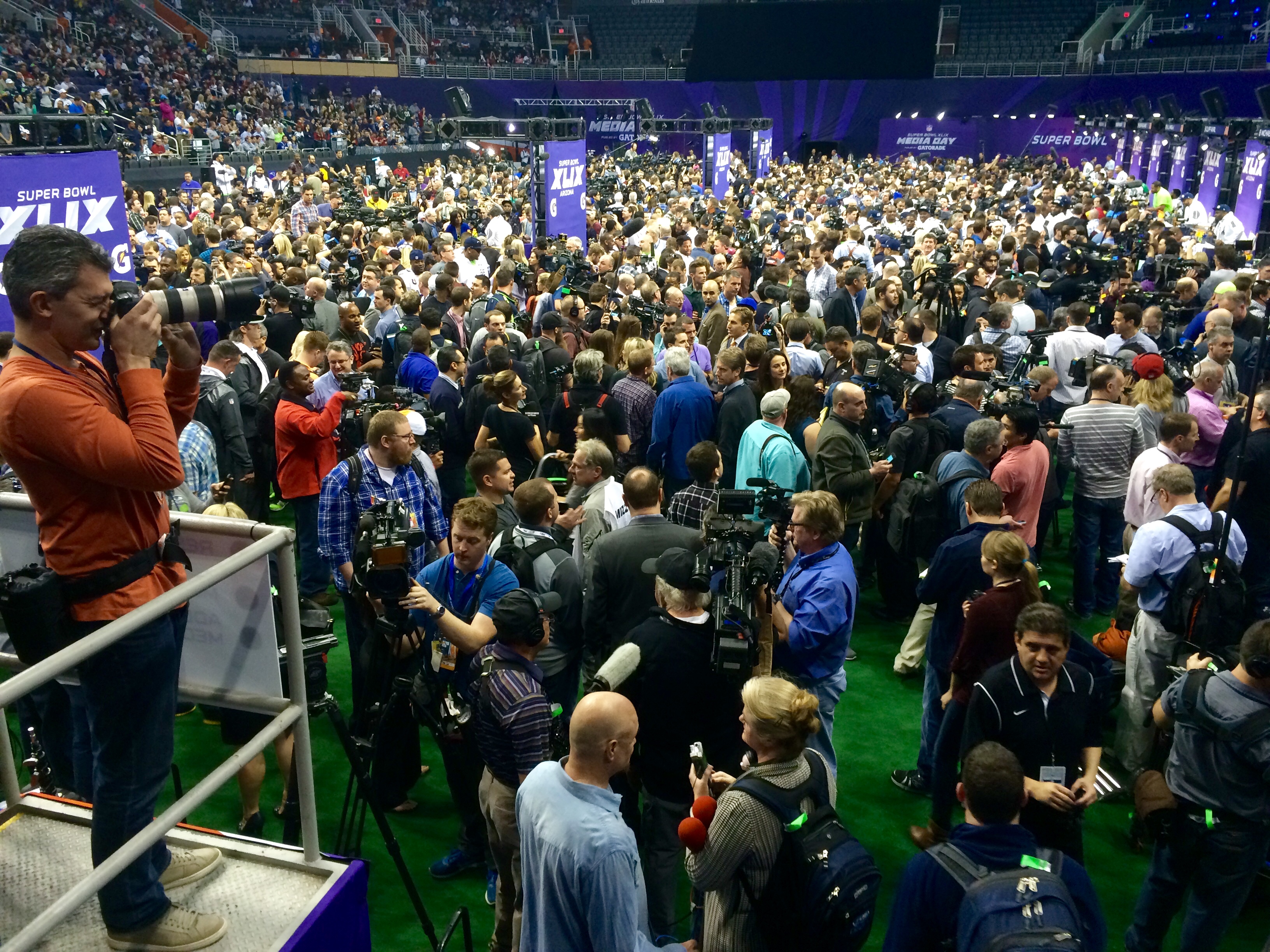 Super Bowl XLIX Media Day was just as wild and chaotic as everyone expected as the New England Patriots and Seattle Seahawks took turns answering a myriad of football and several non-football related questions, as well inside the home of the Phoenix Suns, Talking Stick Resort Arena.

1. Lynch Mob…one day after holding a Skittles press conference Seahawks Marshawn Lynch took to his mini-podium and fielded questions in front of a swarm of reporters, cameras and mics. His go-to response to the onslaught of inquiries was, “I’m here so I don’t get fined.” Ok, then. For the record he spoke for around two and-a-half minutes at his Skittles briefing and just under five at Super Bowl Media Day.

2. Great to Sea You!…although Lynch exited stage left pre-maturely the rest of Seahawks players and coaches seemed to genuinely enjoy the event. Russell Wilson flashed his classic smile. Pete Carroll rolled with the punches just like Pete Carroll does. Some players, like linebacker Bobby Wagner, even took the time to sign a few autographs for the Seattle fans sitting in the lower bowl. “I feel great,” safety Earl Thomas said. “This is unbelievable. I’m soaking it all in.”

3. Crowded House…after selling out the Pro Bowl Sunday night in Glendale fans continued their onslaught of Super Bowl week events even packing most of the upper deck on one side of the arena to watch the glorified circus below. The price of a ticket ($28.50) included a gift bag and small radio to listen to some of the players interviews. There were also concession stands open to fill any cravings. Strongly attended events could go a long way to ensuring the Super Bowl makes a return to Arizona in the coming years.

4. Barrels of Fun…they say the freaks come out at night, but Super Media Day is an exception to said rule. There was an obese man dressed in nothing but a barrel. A select few super heroes and the usual “journalists” who likely didn’t know who was playing before arriving to the arena. One Spanish television station offered a free kiss by one of their young “reporters” to the Seahawk who player best salsa danced–with the help of special player “correspondent” Christine Michael. Richard Sherman, Russell Wilson, tight end Luke Willson and several others participated. Not sure who got the lucky smooch.

5. Stuffed…one can only imagine how excited Patriots head coach Bill Belichick must have felt when his alarm went off Tuesday morning. Oh, great…another day answering questions. In one of the lighter moments Belichick, sporting his signature hooded sweatshirt, was asked by a little girl holding a Pats’ mic what his favorite stuffed animal was. “I like a little puppet,”  he said. “One you can put your fingers in. It’s a monkey.”  Ah, media day…