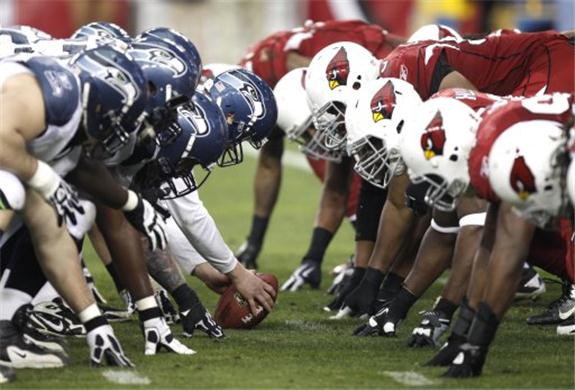 Many would argue Sunday’s game against the Seattle Seahawks (10-4) is the biggest regular season game in Phoenix/Arizona Cardinals history. Sunday night’s primetime matchup has captivated the entire state and Cards’ fan base as the Bird Gang (11-3) attempts to wrap up home field throughout the playoffs with a win this weekend.

Here’s what many are buzzing about for #SEAvsAZ under the lights at University of Phoenix Stadium.

Bruce Arians on being big home underdogs: “The only one that needs to believe is that locker room and they believe it…we’ve been written off all year. Ya know, write another check. It’s easy. You never have to check your bank account, just keep writing checks. We like where we’re at and we like the guys who are playing for us.”

Russell Wilson on the matchup: “This is what you play in the NFL for. This is why people watch the games. It will be a great game, a great matchup. It will be a physical game. We’re looking forward to it and I know they are, too. Going on the road, it’s never easy. We’re going to have to have great communication.”

710 ESPN Radio Seattle host Brock Huard: “I think [Arians] provides more bulletin board material than any coach in the league and I think it’s wonderful. In many ways who he is Earl Thomas, Richard Sherman and that ‘Legion of Boom.'” That is exactly who your head coach is…Bruce Arians says, ‘Listen, we sacked Russell [Wilson] seven times the last time we faced them a month ago. Should have had 11.’ He’s not exaggerating. That’s a defensive line who has faced the starting pitcher a few times and feels great about it.”

Ryan Lindley on making his first start this year in a game of this magnitude: “It’s more excitement for me. Just to be able to get another opportunity. For myself, you talk about 2012 [his last start], not many guys get one, let alone two [chances], I’m excited for it.”

SI.com’s Peter King discussing Cardinals confidence level this weekend: “They really believe in Bruce Arians and they really believe in the messages he is going to give them. You can’t underestimate how he leads them and the kind of stuff that he says to them. There’s no question he’s going to bring up [them being slighted nationally].”

Pete Carroll on the Cardinals being short-handed: “They’ve lost guys before they even started [the season]. They haven’t wavered the whole year and they’ve done it with a great formula, one that we really respect. [Forcing] turnovers has been a huge factor for them this year. Whatever losses they’ve had to endure they have and they’ve handled it really well.”

Patrick Peterson on the continued lack of respect: “We were underdogs against the Rams last week and they were what, five and whatever? We were the number one [seed] then and we were still the underdog. That’s going to happen every week because teams want us to lose ‘cuz they’re so used to seeing the Arizona Cardinals losing. ‘This game is too big for them.’ This is a different culture around here.”

Former Cardinals quarterback Jake Plummer on advice he’d give to Lindley: “Just go out and play ball and don’t worry about it. You’re in the league for a reason. Trust in the guys around you. Anticipate them getting open don’t wait to see them open…have fun. What an awesome experience and opportunity for this young man.”