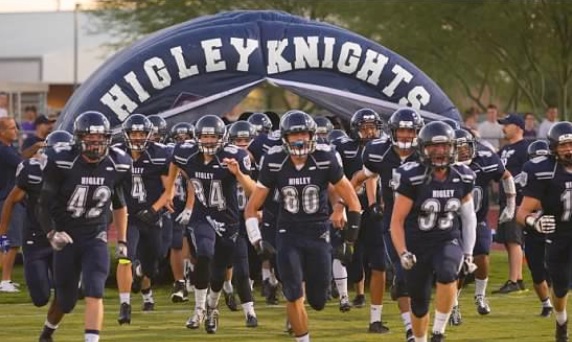 Friday night’s east valley battle between the Higley Knights and Apache Junction Prospectors was one for the ages. A game that went around four hours long which ultimately saw Higley come away with a 95-75 win over AJ.

You see those point totals and the first thing you want to hear about are the stats. Well, after a weekend of watching film and being able to make an accurate count of every yard obtained, it was still state and school records by the bunch and numbers you might only see if you played on rookie mode in Madden.

First for the winning Higley nights, what a story Mason Crossland continues to be. Stepping in for Tyler Bloom who tore his ACL week one, he continues to shoulder the load for this team much like Drew Stanton has for the Cardinals and Mike Bercovici has done for the Sun Devils. In the game, Crossland threw for 641 yards, nine touchdowns and no interceptions. The 641 is now a state record. The Knights had 805 total yards in the game which is the second most in state history.

The Apache Junction Prospectors also put forth an incredible offensive performance and it is a shame they had to lose the game with what they were able to do offensively. The team in total had 829 yards of total offense (581 pass, 248 rush) and 1049 total yards if you include plays on special teams. Those are both School and State records. Crazy now a team that holds those marks in the state record books do so in a losing effort.

For the Prospectors, it all starts with quarterback Adam Abbatacola who went 38-59 for 565 yds and five touchdowns passing and one interception. He also moved the chains with his legs rushing 12 times for 169 yards and two touchdowns and even had a 16 yard reception! For those scoring at home, that is a combined 750 yards of offense from one person!

Along side Abbatacola, WR/RB Tanner Garcia had a big game in multiple facets with five receptions for  178 yds and two TD, five rushes for  30 yards and another two scores and finally, 188 kick return yards which included a 95 yard kick return for a score. Receivers Trent Gonwa (10 rec 137 yards, 3 TD) and Kyle Gilgert (13 rec 127 yards) were also big in the game.

It was truly a game for the ages and one that the players who participated will remember for a long, long time.