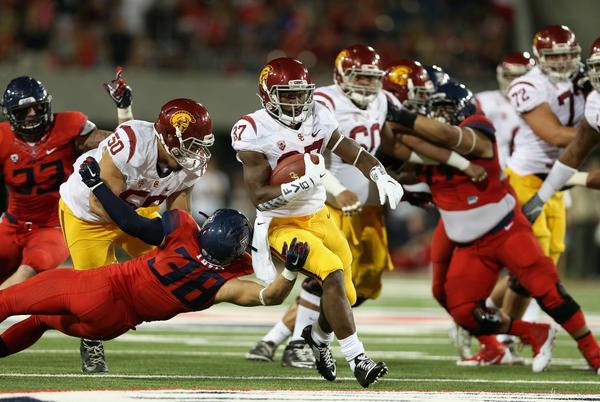 The Arizona Wildcats saw their five-game win streak snapped 28-26 to visiting USC (4-2, 2-1). The 10th-ranked ‘Cats (5-1, 2-1) fell behind early 14-6 in front of 56,754 rowdy fans at Arizona Stadium and never recovered. Saturday marked the first sellout in Tucson since the Arizona State game back in 2012. UofA will look to get back in the win column next week in Pullman against Mike Leach’s Washington State Cougars.

Here are five things we learned in the loss.

1. Short Memories…many, myself included, were shocked to see USC picked as road favorites by the Las Vegas experts. Shows you what I know. Hats off to Steve Sarkisian’s team for showing mental toughness, burying the agony of the “Jael Mary” last weekend and picking up a crucial road win a game many felt could swing the ‘Men of Troy’ as either legitimate Pac-12 South contenders or a team with a long season ahead. The Trojans made big plays on both sides of the ball and never looked back after taking a 7-3 lead just over midway through the first quarter.

2. Buck Knife…another week, another Arizona school with no answer for 6’1, 220-pound junior running back Javorius ‘Buck’ Allen. Coming off a 229 total yard, two-touchdown effort in the loss to ASU, Allen logged 26 carries for 205 yards and three touchdowns in the Old Pueblo. The Doak Walker Award Watch List member became the first Trojan to eclipse 200 rushing yards in a game since 2010. Few backs in the Pac-12, or the country for that matter, have the complete skill set of Allen who showed burst on the edge and toughness running between the tackles, averaging just under eight yards a carry against UofA.

3. Baker the Playmaker…Arizona played the entire game without leading rusher Nick Wilson (ankle) and the second half without backup Terris Jones-Grigsby who was shaken up after being drilled and fumbling inside the USC 10. In stepped seldom-used junior Jared Baker who responded with a team-high 43 yards rushing and two touchdowns. He also added four receptions for 50 yards, including a big 41-yard touchdown reception from Anu Solomon on fourth and three. As witnessed Saturday you can never have too many productive running backs and Baker’s performance only strengthens a position many felt could have been a troubled spot after Ka’Deem Carey left early for the NFL last spring.

4. Zoned Out…the Wildcats offense was far from opportunistic in the first half making four trips inside the USC red zone and coming away with only six points. Rodriguez stormed off the field after the ‘Cats interior protection broke down and Claude Pelon blocked Casey Skowron’s 34-yard attempt on the final play before halftime. The six points, (two short Skowron chip shots) overshadowed 243 total yards (205 through the air) and 7-13 first half third-down conversions.

5. Breaking Bad….the ebbs and flows of a long season came full-circle for Arizona. After the Football Gods frequently smiled on Coach Rod’s team through the first five games, Saturday saw dropped passes and potential interceptions, as well as a number of mis-communications between Solomon and his receivers. The ‘Cats were outgained 237-77 on the ground despite holding a slight edge (472-424) in total yards. As noted above, much of their shortcomings stemmed from missed opportunities on USC’s side of the field in the first half when there were numerous opportunities to seize early control.