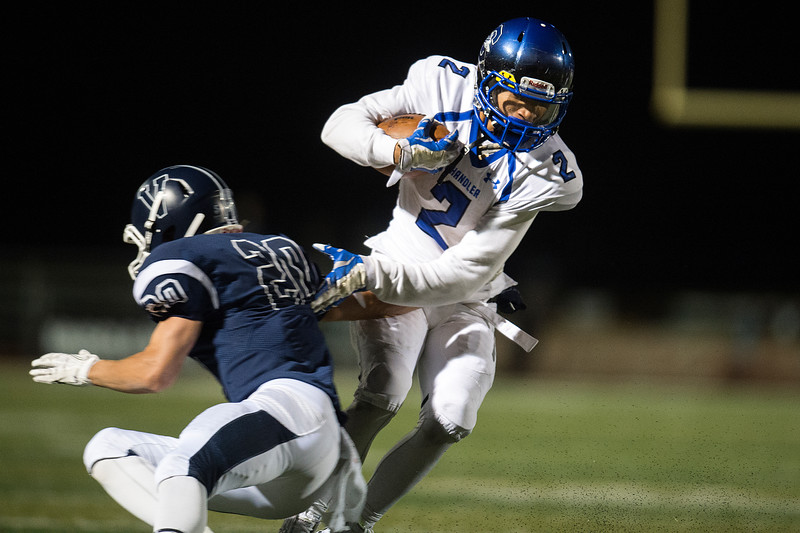 The Chandler Wolves turned a corned in 2013 getting their first win in 18 tries over the Hamilton Huskies in what was thrilling finish. But the two teams would meet again in the playoffs and the big bad Huskies did what they have always done best and that’s win when it means most.

In 2014, Chandler came into the game battle tested with a win in snowy weather in Colorado and then being just barely on the wrong side of a shootout with the defending champion Mountain Pointe Pride.

The Wolves did what the Huskies have done so many times and punched their Arizona Avenue foe in the mouth very early and would never look back, ultimately winning 56-24 ending Hamilton’s 64 game home winning streak. It’s one thing to just barely come away with a win over Hamilton, but it’s another to win in this fashion and it could be the thing that the Wolves need to get the confidence program-wide to reach levels in the state they have never reached.

“I am just so proud of our kids,” stated Head Coach Shaun Aguano after the game. “We wanted to get out fast and hit them in the mouth and see where it plays. I knew we would have the athletes but I wanted to make sure our offensive and defensive lines came to play and they did. They played fantastic.”

Chandler has been among the state’s elite for quite some time now. But from Aguano’s standpoint, and he was an assistant with this program before he was named the head coach, it was one of the most complete games he has ever seen this team play.

“Haven’t seen it quite like this against such a good football team,” he explained. “I’ve seen us do this against team that don’t have as much talent as Hamilton does and their coaching staff is top notch. But our kids executed exactly how they needed to and it was amazing to watch.”

The Wolves can beat you in so many ways. Friday night was more or less a coming out party for two very talented members of the team. Aguano had been raving about wide receiver Justin Jan for how he improved from his junior to senior year and considers him their go-to guy. On Thursday, Jan hauled in four touchdowns which including one fantastic diving catch and another touchdown that went for 55 yards running down the seam.

“Justin and I have a great chemistry,” stated senior quarterback Bryce Perkins. “He’s one of my best friends. I know him, he knows me and it works out perfect.”

On defense, a player that started as a more of a role player and a back-up safety is senior Jaray Mills who now, the Wolves coaching staff can’t keep off the field on defense. He was everywhere against the Huskies in the win.

For a Chandler team who was issued their first loss of the season just two weeks ago against Mountain Pointe, is now seeing a confidence level reach an all time high after this win.

“I thought we got down a little bit after Mountain Pointe,” Aguano mentioned. “But I do think we are one of the top teams and our goal is to win the state championship.”