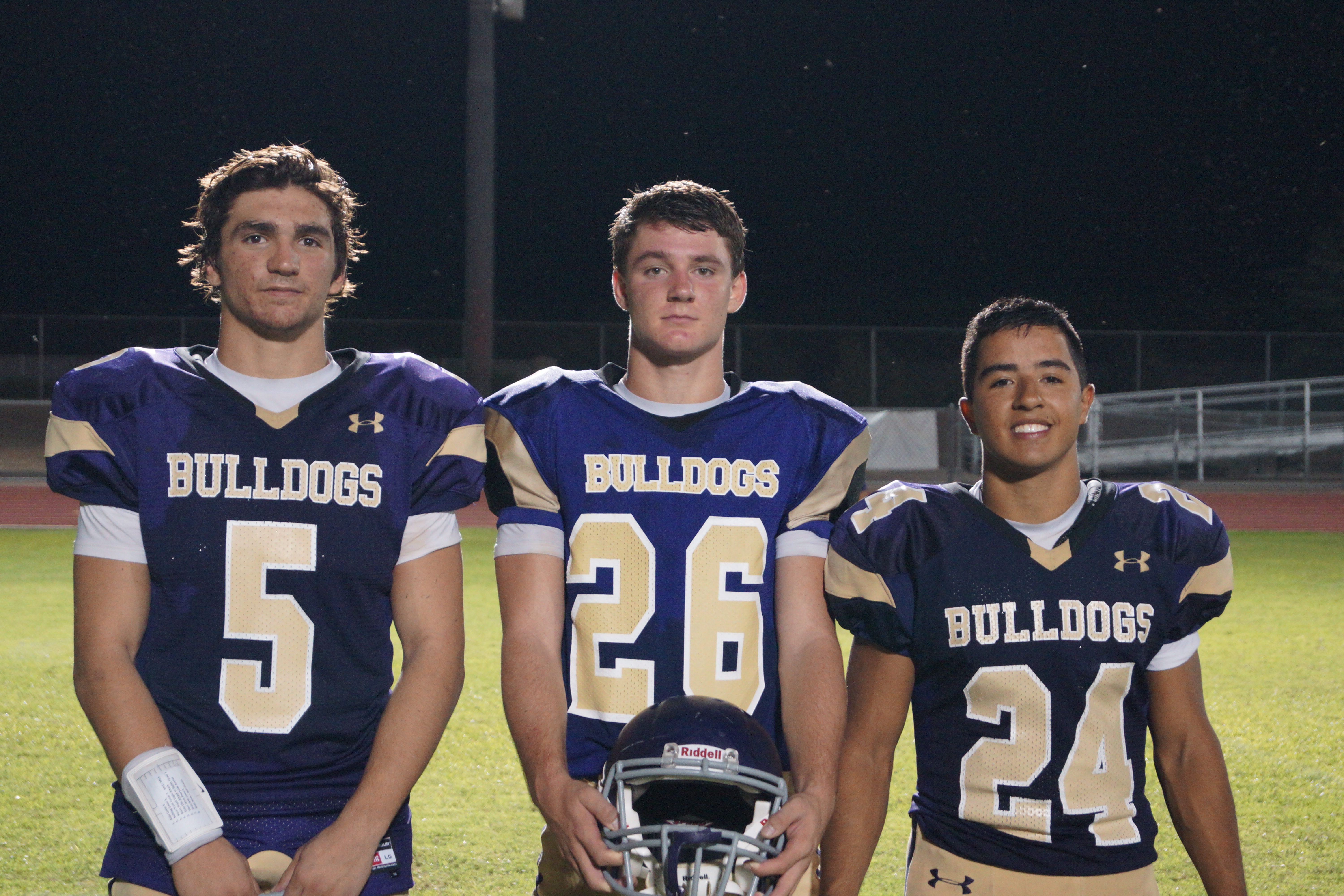 The Queen Creek Bulldogs are known for their power running offense, a rushing attack that has totaled over 8,200 yards over the past two seasons. Having great, not good, running backs has contributed to those unparalleled totals. Two years ago it was junior running back Matt Guida, who rushed for over 2,800 yards, 31 touchdowns, and earned Player of the Year honors. Last year, after Guida suffered a nagging, season-long hamstring injury, junior Weston Barlow stepped up and rushed for over 2,300 yards and 24 touchdowns. Barlow was off to another fantastic start this season, rushing for over 650 yards in three games, including 373 yards last week versus Show Low. Friday night against McClintock, he rushed for 157 yards on 13 carries and two touchdowns before leaving with an ankle injury in the second quarter. He has 13 touchdowns this season despite still not playing a full game. The Bulldogs were leading 13 – 0 at the end of the first quarter Friday night and were driving for another score early in the second when Barlow left the game with the ankle injury. The Bulldogs looked sluggish after he left and for the remainder of the half. They took the 13 – 0 lead to the locker room at halftime. Just like Barlow did last year, the Bulldogs needed another running back to fill the void. This time a trio of running backs – Gavin Danielson, Jordan Bartlett and Walker Pattyson – did exactly that, rushing for over 225 yards and three touchdowns in Barlow’s absence. “It was definitely a great opportunity,” said junior Walker Pattyson. “Even though we lost a big, valuable player to our team, it was fun stepping up and seeing what we could do.” The Bulldogs rushed for 450 yards on 50 carries as a team Friday night, proving they have depth at the running back position. Danielson rushed for 111 yards and scored two touchdowns on runs of 20 yards and 6 yards. Pattyson broke loose in the fourth quarter for a 62-yard touchdown run and Bartlett totaled almost 100 yards rushing. “It was nice to get in there, show what we (can do), and have a chance to play for our team,” said Bartlett, a 5’4”, 160 pound senior. “It (was disappointing) when Weston went out because of his ankle. Hopefully he can get healed up for next week and the week after.” “I felt like I did well,” added Danielson, a junior. “I showed the coaches what I could do tonight.” Bartlett may be small but it doesn’t bother him. As a matter of fact, he believes his size works to his advantage. He compares his style of running to that of a current NFL player. “I love being smaller than everyone else,” Bartlett said. “My role model is Darren Sproles.” Barlow, who originally suffered the injury last week against Show Low, returned to the sidelines in the second half, without his equipment, and using crutches. He said he’ll have the injury looked at tomorrow morning. He doesn’t believe it’s serious and expects to be ready for next week’s game at undefeated Higley. After Friday’s win, Bulldogs’ head coach Travis Schureman was less optimistic about Barlow’s playing status next week, especially with a game versus Saguaro the following week. The Bulldogs appear to have another running back, or a stable of running backs, ready to step up in Barlow’s absence. It’s nothing they’re not used to. “I’m definitely ready to step up, show what I can do, and bring it all to the table,” answered Pattyson when asked if he’ll be ready in Barlow’s absence. “I’m definitely ready,” said Bartlett, who may as well have been speaking for all three running backs. “The team needs (us), we’ll be ready. It’s a team effort.