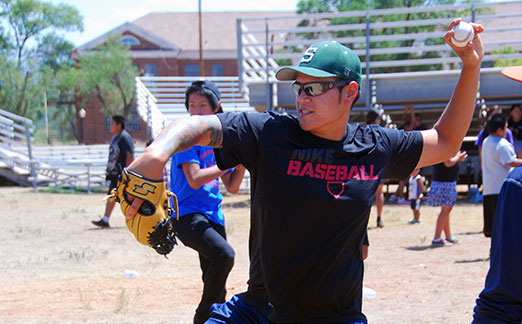 A contribution story from Anne Groebner

As long as I can remember, Sebastian Kessay played baseball, and at every game, not far away in the stands, his parents, Johnathan and Fern, sat silently cheering him on. They were his biggest fans. So it’s not surprising that at 11-years-old, he was firing 60 mile-an-hour balls from the plate and pitched his high school team to the State finals and the team’s eventual first time championship win. Now, as he continues on the path of his passion as the first White Mountain Apache to play professional baseball (for the Houston Astros), he came home and gave back to his community. At the White Mountain Apache Future Generation’s Youth Conference, Kessay, with the help of his family, recently held a baseball workshop.

Sebastian is a very quiet and humble guy. He is focused on following his dream and has not wavered. He has started his climb up the ladder with Class A ball and is presently on a Team called the Tri-City Valley Cats, a New York-Penn League. I asked him how things were going, in a brief interview on the field and he told me he was living his dream, “It’s really a grind, but I’m slowly, but surely, moving up.” He says he is very glad he took this path, but that he continues to rely on his family for support. “Family is everything,” he says. “It’s the only thing you have left to boost you up.” He stated that although you are playing on a team, it’s not the same as high school. As a player, you are competing against other players for your position. There is, however a lot of downtime and to fill it, he falls back on his second love — music. Kessay is a talented guitar player as well as composer and producer.

Although Kessay loves his career, it is a relief to be home. “Being home feels the same as when I left,” he says. He loves the idea of helping his community, and when the opportunity presented itself through the Youth conference, he put together the baseball workshop and it was a huge success. “It means a lot to me to be able to bring baseball and sports into the lives of these kids. They need to know that it doesn’t matter how or where you grew up. If you want something bad enough, you can do anything — I am living proof.” He also stated that it is important to let kids know that there are a lot of temptations out there, and that he hopes that they can stay off drugs and alcohol and stay focused on following their dreams. He always had one goal in mind and it wasn’t school, he says, “I had a lot of offers from D-1 schools, but I just wanted to play ball. School will always be there and I plan on going back, but right now, I took this opportunity.”

The workshop brought in a large group of kids of all ages. Kessay says they have great potential and he is glad that he had this opportunity to work with them. He hopes that they can continue on in sports and that they know that anything is possible. He says, “I always had one goal and I knew anything was possible because no one ever told me otherwise.”