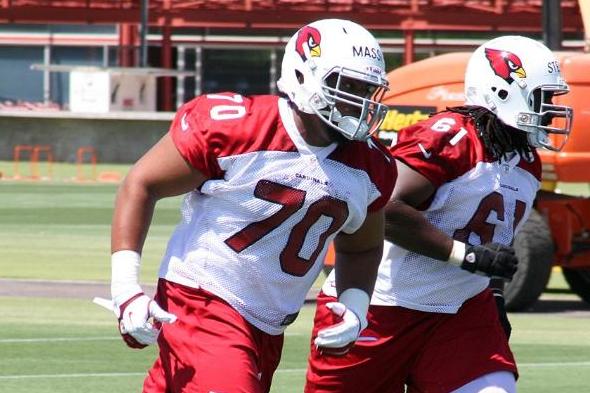 When asked about the Cardinals’ right tackle position battle, Bobby Massie had a short, but assertive answer.

Head coach Bruce Arians agrees with Massie, stating the starting job is his to lose.   When asked if there was pressure in regards to his position battle, Massie was just as straightforward.

“There’s no pressure.  I put myself in this position so the only person that can mess it up is me, so I’m perfectly fine with it.  Just play ball.”

As a rookie, Massie was a bright spot to a very poor 2012 for the offensive line.  2013 was not as fruitful for him.  Eric Winston took his starting job, and Massie only appeared in eight games.  He admits that complacency took over during his sophomore campaign.

“I finished top 3 tackle in the league (in terms of) pass protection,” Massie said.  “I was still kind of coming off that high and I felt like I deserved a spot because of the way I played, but that wasn’t the case and that showed.  It was a learning experience for me.”

That experience created a new drive within Massie.  Members of the Cardinals’ staff have raved about Massie’s shape entering camp, and another with Bruce Arians‘ scheme has helped him as well.  Massie says his mental and physical preparation will ignite his return to the starting lineup.

“I feel like this is the best shape, physically, mentally, I’ve ever been in.  High school, college, whatever so this is my year to showcase what I can do”.

THREE DOT THOUGHTS - Sports Betting Coming to AZ in 2021, Bubble Ball for Pac-12, Open Division Missteps and a @kfitz134 tip of the cap https://t.co/HnCqfosyZ1 via @sports360az
View on Twitter
1
1