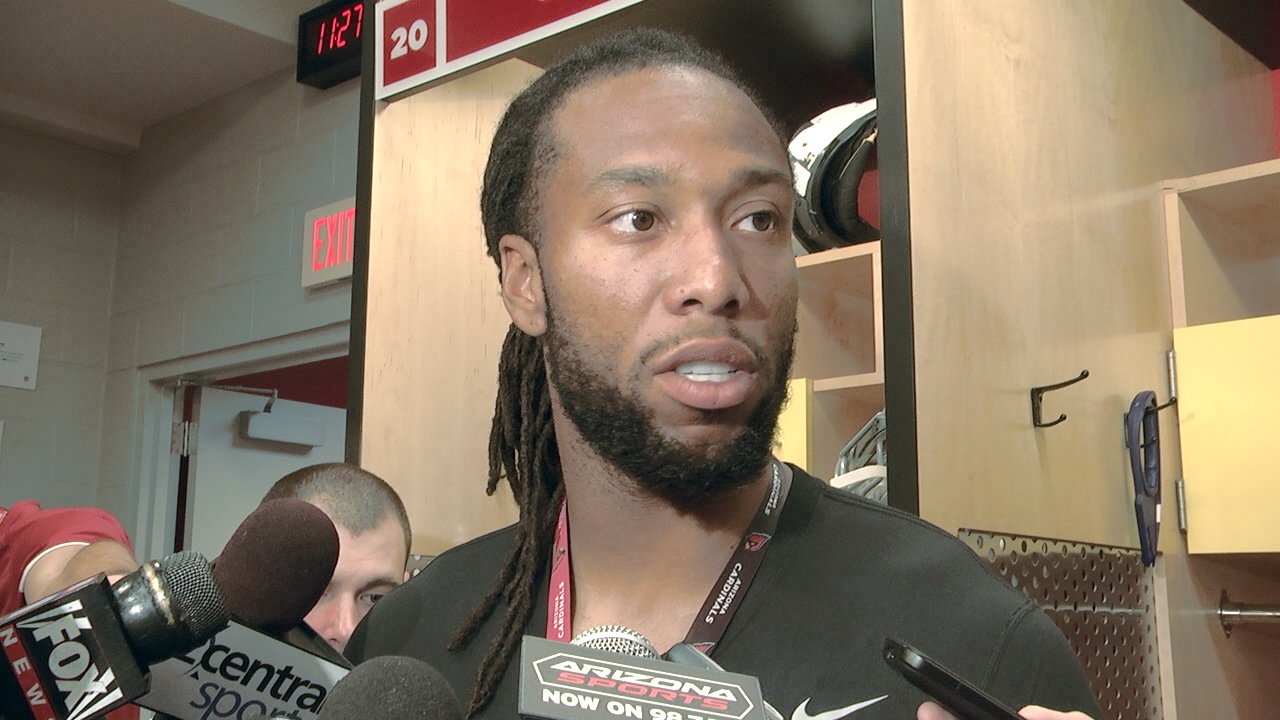 What a difference a year can make.

The Arizona Cardinals began training camp in 2013 with a new coaching staff under Bruce Arians, new quarterback in Carson Palmer and an uncertain feel of how the team would be able to compete in the brutal NFC West. Fast forward to the start of Cardinals Camp 2014, it is a completely different feel.

Expectations are at an all time high coming off of a ten win season falling just short of the playoffs. Many predict the Cardinals to be in playoff or bust more this season coming off their success but the team and coaching staff don’t feel the pressure of expectations, the feel the pressure that they put on themselves.

“Expectations come from within,” All-Pro Larry Fitzgerald explained. “We expect a lot from ourselves and it doesn’t matter what people predict and what people say doesn’t have any bearing on what we do. It’s about the men in this locker room.”

“It’s better than being 32nd which we were two years ago and finished 11-5,” Arians joked. “But I don’t put a lot of stock in any of it. It could all change with one injury or two. But right now I agree that we are a quality football team that plays in a very tough division and we have to win the division.”

“This is by far the most talented team I have ever been on top to bottom,” Palmer added. “You look at from returners, our specialists, our offense and defense, we are a very talented group and are very fortunate to be as talented as we are.”

Coming off of a ten win season and the first full offseason for the Arians-era, there is no longer a focus of learning, teaching and adapting as there is a feel of perfecting as well as focus.

“It is really hard to call this camp anymore,” Arians explained. “There is not as much physical grind to this as there used to be. It’s all mental. For us to get to where we want to go, our mental error sheet and penalty sheet has to decline from where it was last year and it really should now that we have been in this for a year.”

“When I first came in, there was definitely a lot more two-a-days and now it is definitely a lot more mental,” mentioned Fitzgerald. “You have to make sure that you are always on the ball in terms of mental preparation and understanding the play that is going on. Even if you are not getting the rep physically, you have to be in it mentally and that’s what he’s (Arians) is always focusing on.”

At is well documented that as Carson Palmer became more and more comfortable in Bruce Arians’ system, his performance improved. Now with a full year under his belt, Palmer is in position to lead what hopes to be a vastly improved offense. But the work is still being put in. Palmer and Arians would text each other often throughout the offseason and the results are already being seen as the Cardinals begin camp.

“(We would text) about different ideas, on scouting and self-scouting, question about a golf score that he had or may not have had,” said Palmer. “Just Anything.”

“He had definitely done a lot of work, even since OTA’s on his blitz pick-ups,” Arians mentioned. “Knowing your protection is the key to this league and if you can handle your protection and the dogs, you wont see them as much. If you can’t, you’re going to see a bunch of them. Right now he is lightyears ahead of where he was last year.”

The focus now, staying healthy. This time of year we constantly see far to many season ending injuries. It was seen last year with Jonathan Cooper being sidelined. In the first two days of training camp around the NFL, the 49ers Kendall Hunter (torn ACL), Colts’ Vic Ballard (torn achilles) and the Ravens’ Aaron Ross (torn achilles) all sustained season threatening injuries before any contact was even incorporated. It is something Arians would obviously hopes won’t occur, but states that it cannot hold them back from putting in the work.

“That’s the downside of the business,” he stated. “You cross your fingers every day. But you have to practice and you have to get after it. You have to be smart about it but those non-contact injuries are the ones where you just shake your head and say why?”

As it stands right now, other than the Cardinals having Tyrann Mathieu and Alameda Ta’amu on the physically unable to perform list, Arians says his team is “healthy as I’ve ever seen.”

Cardinals continue to begin their work for Training Camp from University of Phoenix Stadium leading up to their first preseason game against the Texans on August ninth.