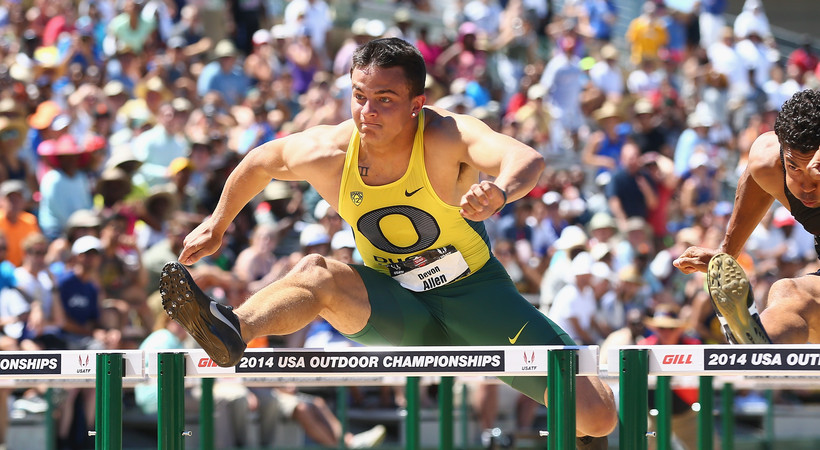 It wasn’t long ago that the 2012 Summer Olympics were taking place in London and while that was taking place, Brophy two-sport star Devon Allen was training and competing in national junior track events.

Fast forward to Sunday, Allen was standing at the same starting line as the sprinters he was looking up to in those 2012 games.

Allen stood in lane number three in the finals for the 110 meter hurdles at the 2014 USA Outdoor Championships along side USA Silver medalist from the 2012 games, Jason Richardson, Ronnie Ash who recorded the 14th fastest time ever in that event and was the expected favorite to win this one, and David Oliver who is a three-time U.S. Champion in the event. Allen at 19 years old, was by far the youngest one in the race.

“I try not to get start struck,” Allen said. “Earlier this year I ran against Ashton Eaton and I was kind of star struck with that. But other than that, I try to just try to stay focused and with David Oliver and Jason Richardson and Ronnie Ash, all of those guys I was running with who run a fast time, I was just trying to stay focused and not really worry about them too much.”

Well that focus came to fruition. Ronnie Ash, who was right to Allen’s right in lane four, hit a hurdle at number seven and took a spill. Allen noticed it but allowed his focus to get him through the rest of the race.

“I definitely noticed him running and taking a fall,” Allen explained. But I tried not to worry about it too much. I just stayed focused to do what I had been practicing and run my race. So it didn’t effect me too much.”

In 2014, Allen lowered his time in that event from 14 seconds flat to the 13:16 which won him the USA and NCAA title. From that time he became the second fastest Collegiate ever and currently holds the third fastest time in the world.

“It’s kind of hard to believe,” Allen stated. “Starting the season, it didn’t really go as planned. I was injured coming out of football, I was a little out of shape, a little over-weight, not really running as fast as I wanted too with like you said, starting the season running a 14 flat. But as the season progressed, my coaches stuck with me and my strength and conditioning coaches, they kind of just stuck with me to see if I was ok and make sure I was doing the right things on the track and in the Kitchen.”

“It all kind of starting clicking around the Pac-12’s,” he added. “I started running pretty fast and every practice I started running better and better. And faster and faster…In every race this year I PRed. That is pretty impressive I think. It’s exciting for me too because I feel if I could run a few more races, I can run even faster.”

He mentioned how much he progressed since football ended but doing so wasn’t easy. He was on a ridiculous schedule working through both track and football during the spring but all of the work he was putting in along with very little downtime, got him to the top of the podium by the end of the season.

Allen amongst making quite the name for himself nationally on the track, was also all the buzz on the football field after a very impressive spring game in Eugene in which he hauled in two touchdown catches in the game. He mentions he might take a break for the first time in what seems like forever on the track and focus back in on football in the coming weeks before the start of fall camp.

“We have summer strength and conditioning that I am going on right now,” he mentioned. “So I will just get back into lifting and running and all of that.”

Allen has sure set the bar high for himself after just one year at the University of Oregon. If the best is yet to come, the sky seems to be the limit for what he will be able to accomplish.