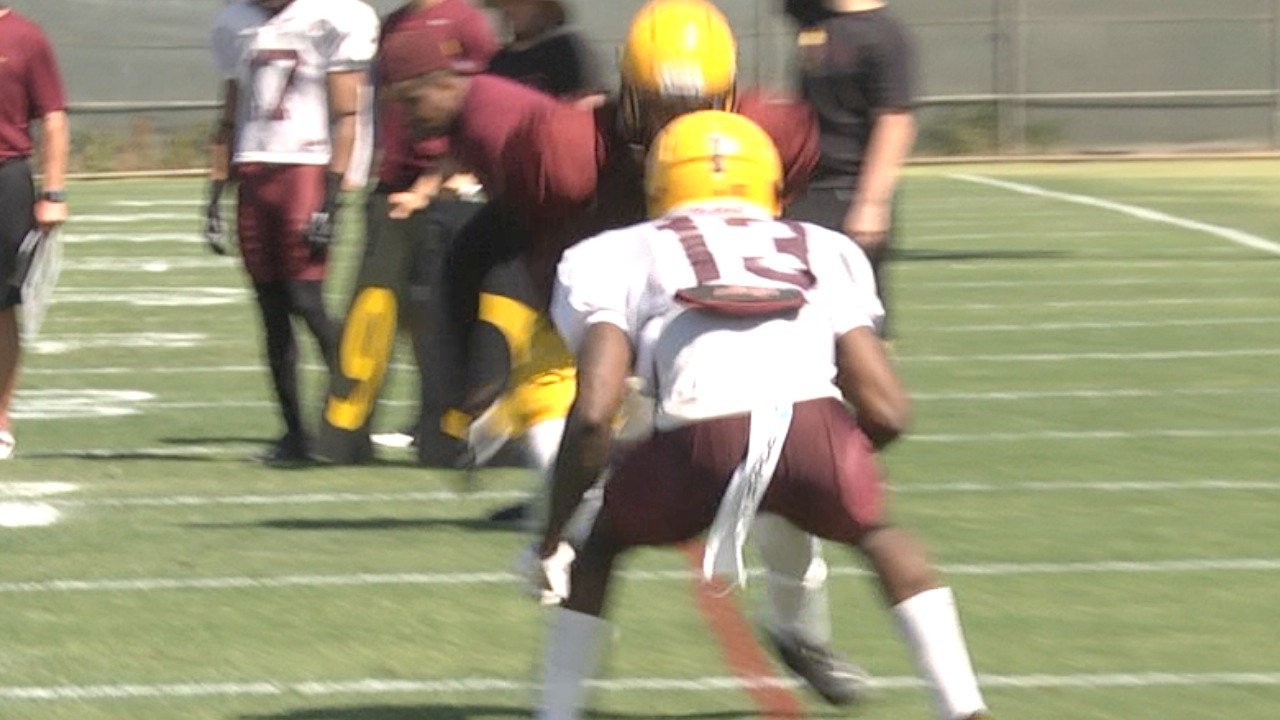 One would think that after losing players like Alden Darby, Osahon Irabor and Robert Nelson, all of which were all-Pac-12 performers in 2013, in one off-season, the secondary depth might be cause for concern for Arizona State going into the fall of 2014.

But if you asked Todd Graham, it’s the least of his worries as the team is participating in spring practice.

“I do think our strength is at our safety position,” Graham explained. “You have Damarious (Randall), you’ve got Marcus Ball, you’ve got (Jordan) Simone there, you’ve got (Ezekiel) Bishop…Lloyd (Carrington) is a guy who is very confident and Wadood has got a lot of ability.

Rashad Wadood, the last player Graham mentions there, is a player who is really starting to stand out with his play during spring ball at the corner back position. The reason? Everywhere star wide receiver Jalaen Strong goes, so does Wadood. To be the best, you have to compete with the best and he is doing just that in order to cement his place in the Sun Devil defense.

“It’s all competition,” Wadood said. “He’s one of the best in the Pac, great receiver, great dude. We talked during winter workouts and I said ‘Jalaen, we got to work this spring.’ So everyday we just compete, go at it, he’ll get me, I’ll get him, we’ll go back and forth. He’s making me better and I’m making him better. I love it.”

Wadood along with Carrington are guys that could have some big shoes to fill next fall. Alden Darby was the emotional leader of the team last season but the guys Wadood is taking over for in Osahon Irabor and Robert Nelson, have been impact players on defense. Wadood has taken it upon himself to learn from all three.

“Darby’s a great leader. Thats obvious, everyone knows that,” he mentioned. “Osahan was more of a silent leader. I sat behind him for a lot of my younger days of my career here and I learned a lot. Robert Nelson was one of the most talented guys I’ve ever been around. I learned a lot of techniques and took a lot from his game. “

“Being a young guy behind them has kind of molded me and matured me into the player I am now,” he added.

It’s one thing to learn from the best, it’s another to take it to the field. In Tempe for ASU spring practices is the time Wadood is taking advantage to prove he is doing so.

“Every day I step onto this field I want to get better,” Wadood explained. “Going toward my ultimate goal of getting back into the starting lineup and once I do that, take it step by step to my next goal of being an all-conference player.”