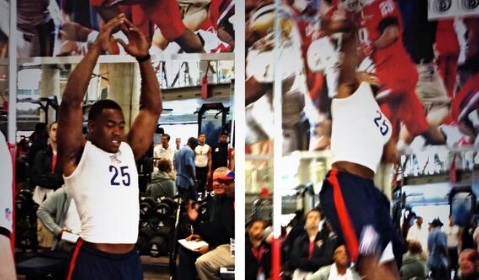 As the NFL Draft approaches fast, the Arizona Wildcats football program held their pro day for the members of their 2013 class. They participated in a combine-esk workout which was put together by Arizona’s  Director of On-Campus Recruiting and Player Personnel Matt Dudek.

Among those in attendance, was All-American Running back Ka’Deem Carey who is projected as a first or second round pick. Carey already worked out for many top NFL scouts and front office members for the NFL Combine in Indianapolis two weeks ago.

“It was a great experience talking to coaches,” said Carey. “The interview was a lot of questions about on the field, off the field, random questions that they try to throw you off your rocker. That’s what they were trying to do but they didn’t do it. As a result, coaches came up to me and said I had great interviews down there, so that’s definitely a plus for me.”

Carey was in the news for off the field problems last summer which have since been resolved. When he has met with teams during this process, Carey mentioned that they are hoping to get to know Ka’Deem the person more than Ka’Deem the player seeing as his numbers and film speak for themselves.

“They want to know my personality – am I a knucklehead, do I go out and start drama,” Carey explained. “They got a good taste of that when I was in Indiana and saw what type of person that I am and the type of character that I can bring to the team.”

More notable players that stood out on Thursday were starters Marquis Flowers, Shaquille Richardson, B.J. Denker Terrence Miller and Tevin Hood. All who had a lot they wanted to prove.

“Everyone told me I couldn’t play in college but I did that,” mentioned quarterback Denker. “Maybe if someone tells me I can’t play in the NFL it’ll jinx me to being able to. It doesn’t matter to me. I’ll play anywhere. I’ll go play in Canada, Europe, travel the world.”

“I definitely wanted to show that I have the speed despite my size, that I have explosiveness and strength and that my lack of height is not an issue,” mentioned defensive tackle Hood. “Back in high school I heard about it. Now, you don’t hear about it as much because there are a lot of shorter players in the league. Measuring under six foot as in interior d-lineman is basically an asterisk next to your name. As long as you can perform and show that you have the skills necessary to do the job, it’s not too big of a deal.”