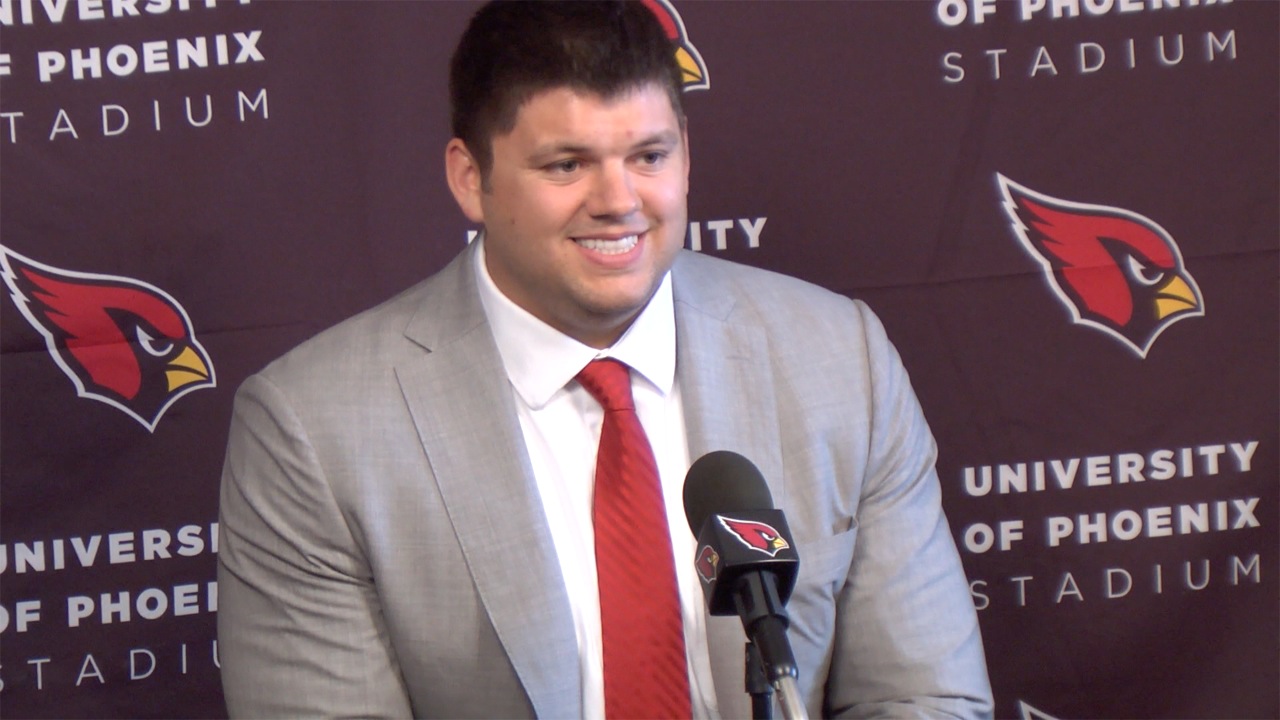 A player leaving an organization with instability for a team that is secure in their ways and on the brink of a run in the NFL playoffs.

For much of the Arizona Cardinals’ history, they may had been the first type of team mentioned in the eyes of key free agents looking for a new home in the league. But after what Steve Keim, Bruce Arians and the Cardinals were able to accomplish in just one year, that reputation has drastically turned.

“Seeing everything that was here, seeing what Coach Arians has done, what a great direction the team is heading in. There was really nothing more that needed to sell me than looking at all of that.”

That statement made by the newest member of the Cardinals which was made official on Wednesday, left tackle Jared Veldheer. Somewhat of a different tone from a player as sought after as him to make about the Cardinals compared to what many free agents may have believed in the past.

The 6-8, 321 pound left tackle signed a five-year deal with the team after playing his first four NFL seasons with the Oakland Raiders. Many expected the Raiders to give Veldheer the franchise tag but after they failed to do so, the Cardinals front office made a mad dash for him.

“We got the guy we wanted,” stated Cardinals General Manager Steve Keim. “We initially anticipated that the Raiders were going to tag him, so when they did not do that, it was full steam ahead.”

Keim added that the Cardinals were “very,very aggressive” in their pursuit of Veldheer as his agent and brother Aaron Veldheer was the first person they called on Saturday when they were first able to reach out to free agents.

It was also mentioned by Keim that they knew what kind of played Veldheer was just by watching him on film. It was his character that they wanted to get to know more about before their aggressive push for him. Lucky for Keim, there were current Cardinals with first hand knowledge.

“I’ve talked about it many times before, sometimes you miss on the person more than the player,” Keim mentioned. “We had great intel in our building with Kevin Ross our corners coach who was in Oakland and obviously the ability to talk to Carson (Palmer) about Jared at length and both of them came back to us with an unbelievable and unbiased opinion of him.”

Carson Palmer and Jared Veldheer were teammates while with the Oakland Raiders for two seasons. Veldheer mentioned the great memories he had playing with him and how excited he is to take the field with him once again.

“He’s such an awesome guy to work with,” Veldheer said of Palmer. “He a great quarterback, great leader in the huddle, very smart, the tempo in which he plays at is great to be a part of…I think he is a great weapon and I am happy to be back with him.”

“It gives Carson a lot of satisfaction and relief in knowing that this guy can play for him, and has played for him,” mentioned Cardinals Head Coach Bruce Arians. “Carson came to me and said we’ve got to get this guy…He fit what we were looking for so it was a no brainer.”

There was a good batch of offensive tackles out there on the market this off-season. Many thought Branden Albert would be one that the Cardinals would actively pursue as he was probably the biggest name out there. But with Veldheer, the intangibles of his age and size plus one other little aspect that make him perfect in the eyes of the Cardinals.

“Here’s a guy coming out of a small Hillsdale College, goes in the third round to Oakland and all the success he has had to this point, he’s earned,” explained Keim. “And not only has he earned it, he has tremendous upside and is still growing as a player on the technical stand point.”

“I’m just someone that love playing football and works extremely hard,” Veldheer mentioned. “A player that’s a good teammate and is going to be nasty on Sundays.”

When you mention the thought of Veldheer teaming up on the left side of the line with last year’s first round draft pick Jonathan Cooper, it was hard for him to keep his emotions inside.

“Just a big smile,” Arians joked. “Getting Coop back, Coop looks great, and you have to knock on wood that we have them all year. But to have two young guys that good on the left side of the line, you cant put that into words.”