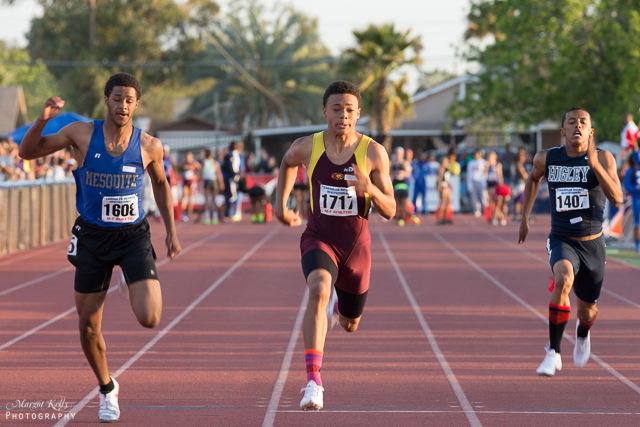 The 74th annual Chandler Rotary Track & Field Showcase took place this past weekend at Chandler High School which displays not only some of the top athletes in Arizona, but from other parts of the nation as well. The fact that it was a national showcase didn’t stop the local talent from putting on an absolute show.

Mountain Pointe’s Paul Lucas is picking up right where he left off from an incredible sophomore track & field campaign. But now as a junior, he is taking it to a whole new level. On Saturday at Chandler, he won the 200m in a lightning fast 200m final which also featured Brophy’s Bobby Grant. The two both proceeded to set Chandler Rotary records in the race. Grant ran a 21.27 for second place and Lucas ran a ridiculous 20.91 which is good for the fastest 200 time in the nation this year according to Mile Split US. Grant, the Miami signee, from that race now has the third fastest time in the nation. Lucas also won the 100m dash by running a 10.52. Paul Lucas meanwhile from a football standpoint is up to five offers (Arizona, ASU, Oregon State, Utah and Washington) since his breakout junior football season.

Corona del Sol’s Tevin Mayfield turned heads in the 300 hurdles with the sixth fastest performance in the US this year with a time of 37.90 according to Mile Split US. Mayfield also finished 2nd in the 110m hurdles in a close race with the time of 14.30.

Like Lucas and Grant represented Arizona with a great showing in the 200. Two Arizona sophomores did the same in the 800m. It was a great race between Perry’s Cade Burkes and Snowflake’s Jordan Gardner. Burkes won the event by running a 1:54.90 and not far behind him for second was Gardner who ran a 1:55.35. Those times for Burkes and Gardner are good for first and second in the nation for sophomores. Burkes’ time is 15th in the nation for anyone this year in the US.

On the girls side of things, North Canyon’s Jasmine Stauffacher-Gray broke the meet record  in the 400m by running a 54.69. The closest behind her was Highland’s Alena Ellsworth who ran a 55.96. That time of 54.69 is not far of the country’s best time of 54.20 so far this year. Stauffacher-Gray also just missed first place in the girls 200m against the defending State Champ, and State Record holder, Ky Westbrook of Chandler.

Westbrook, the USC signee, ran a lighting fast 24.45 in that 200m dash to take first place on the podium. She also finished first in the 100m by running an 11.64 which is good for the seventh fastest time in the nation and 2nd fastest at the Chandler Rotary in it’s history. She finished second in the girls shot put behind teammate Bianca Finn.

All this tells just the beginning of the story with the talent in track & field here in Arizona. I have the state meet circled on my calendar.