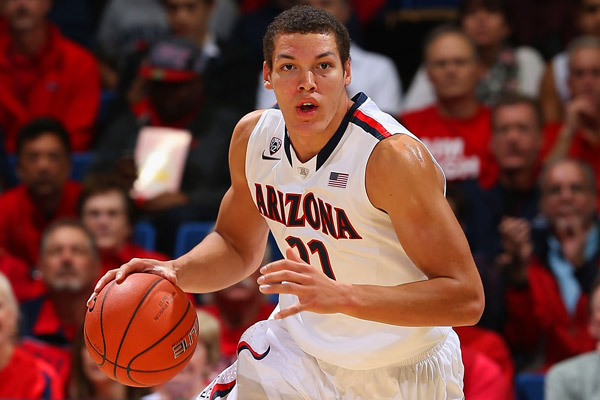 ANAHEIM, CA–On and off the court it’s clear Aaron Gordon is wise well beyond his years.

Since arriving to Tucson last fall the 6’9 forward from San Jose has not only met but exceeded the high expectations Arizona basketball fans had before he ever stepped on campus.

After the Wildcats heart-breaking 64-63 overtime loss to Wisconsin in the Elite Eight Saturday night Gordon, considered by most a sure top 10 pick, wasn’t quite ready to announce his plans to jump to the NBA or return for his sophomore season.

“You know I’m not sure,” he said in an emotional Arizona locker room after the loss. “I have a great family. I have a great foundation…I’ll talk to a few people, see how that goes and make an educated decision.”

Nothing Gordon says or does is typical of an 18-year-old. Head coach Sean Miller agrees.

“I don’t know if you could ever coach a kid that you love more than him,” he explained. “For somebody who came in at the age [he did]. For how he practiced everyday, how great of a teammate he is. It’s remarkable.”

Miller knows whatever decision Gordon makes it will be the right one.

“He’s very bright,” he said. “I know that he’ll take his time with his family. When they get the right information they’ll make the best decision for Aaron.”

Some close to the program believe, barring a change of heart, he’ll jump to the NBA.

Gordon broke the all-time rebounding record in Arizona history (he had a game-high 18 Saturday night)  and was named the Pac-12 Freshman of the Year. For the season he averaged 12.4 points (second on the team), eight rebounds and two assists per game.