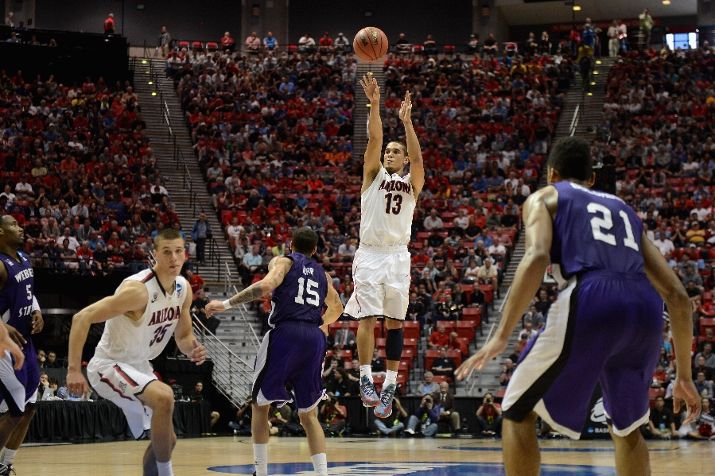 Arizona found themselves down a touchdown at the first timeout of the game, but after that they settled down in workman like fashion to get past Weber State 68-59
As expected defense was the story of the game. The ‘Cats were suffocating, holding WSU to just 30% shooting from the floor.

1) -Gabe York is seldom talked about but as the season has progressed he quietly makes positive plays. With the Cats down 7-0, he scored, had a steal and five quick points in a 1:20 span in the first half. York gives them another perimeter option on the offensive end. His stat line of 9 points 4 rebounds and 3 assists.
Hollis Jefferson gave Arizona a nice lift off the bench scoring 13.

2)Free throw shooting continues to be a problem.
-Mercer beat Duke earlier today by making their shots at the charity stripe(23-28). Aaron Gordon wasn’t on the floor in the final moments when it came time for Weber State to foul. 9-16(56%) isn’t going to get it done unless you shoot 55% from the floor, which is what UofA did today.

3)Weber State didn’t play like a 16-seed.
-Davion Berry was terrific in the second half, scoring 19 of his 24pts. and keeping his team from completely falling apart. We don’t get to appreciate guys like Berry much when it comes tourney time but he was fun to watch.

4)More than just defensive shooting percentage
-Arizona had 12 blocks and they also had several tipped passes and 50-50 balls that went their way. Those are the plays that I continue to see out of a Sean Miller coached team

5)This wasn’t a thing of beauty
-To get to six wins and take home the NCAA Title, very few teams put together a solid 40-minuets. Today was no exception. The stat sheet for Arizona wasn’t the prettiest, but you take the win and move on to Sunday.