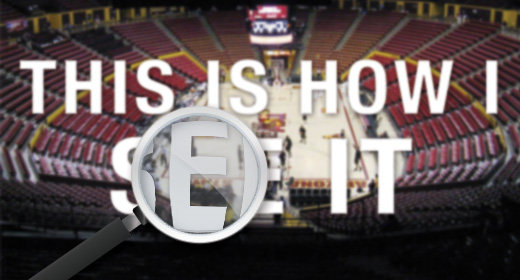 Driving around the Valley this weekend there was an apparent change.

This is life in mid-February as a sports fan. Yep, we get it. The NFL is king.

In a unique twist of fate this weekend’s actions on the field were replaced by one’s off it.

Some bold, others simply bone-headed.

A dramatic, last-second win for tournament-starved Arizona State Saturday afternoon was muddied by post-game accusations from Oregon coaches who claimed an unnamed ASU student reportedly spit on them following the Sun Devils 74-72 thriller at Wells Fargo Arena. To ASU’s credit the administration acted swiftly revoking the student’s season tickets. One’s actions need not speak for a group but this wasn’t the first time there have been issues dating back decades. How can we be surprised by something like this when students sit just steps from the opponent’s bench and must walk past them to enter/leave the court?

The ugly incident was later one-upped by Oklahoma State star guard Marcus Smart who took exception to an unruly Texas Tech fan named Jeff Orr, shoving him after he stumbled out-of-bounds chasing down a play. If anyone was out-of-bounds, it was Orr. Sure, Smart was anything but and lucky he wasn’t charged with assault but what gave “superfan” Orr, a man over twice the age of Smart, the right to allegedly call him “a piece of crap” or far worse as Smart hinted? Do us all a favor and do it in front of your TV with your foam finger. These are kids. Amateur athletes. People like Orr are the one’s who don’t make sports fun anymore for far too many, not Smart.

My guess is at some point Sunday night Smart sent a nice thank you note to Michael Sam who stepped into the bright spotlight as quickly as he stepped into opposing team’s backfields last season at Missouri. The SEC Co-Defensive Player of the Year admitted, on camera, he’s gay. This comes just weeks before his biggest job interview at the NFL Combine where he’ll be asked more questions than Johnny Football. Don’t be naive to think this is the first gay player in NFL. He’s simply the first to come public. We all strive to live in a world where something like this isn’t a big deal but for now we don’t, so it is. Sam’s honesty and humility will go great lengths to help bridge this gap of ignorance.

It’s certainly something the unnamed ASU student and Orr can learn from.