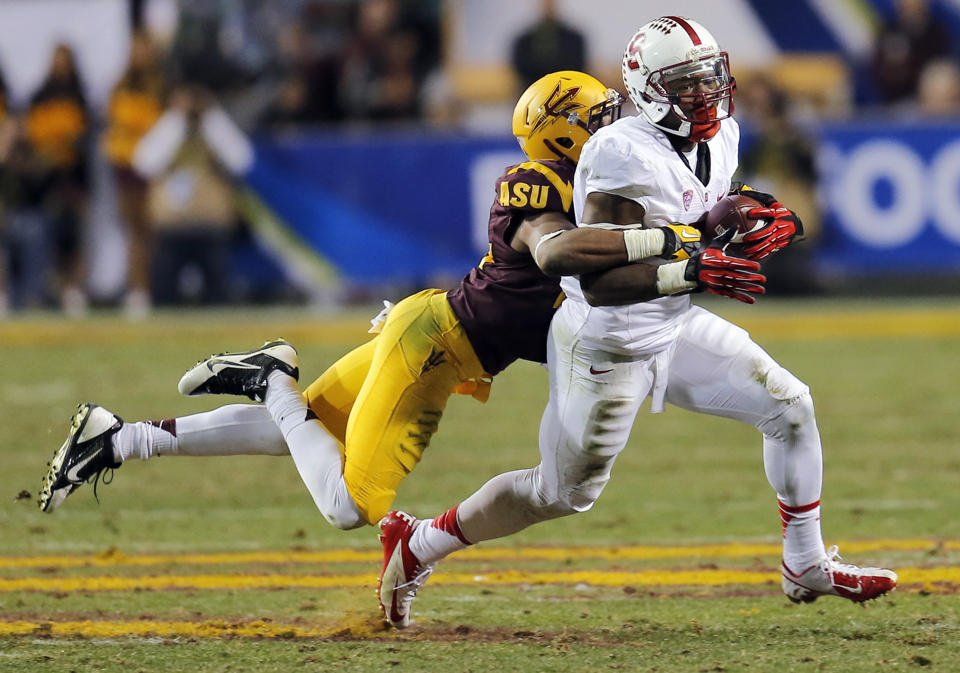 In a battle for the Pac-12 Championship Stanford (11-2) physically whipped Arizona State (10-3) early and often in running away to a 38-14 victory at Sun Devil Stadium Saturday night.

With the win, Stanford will head to Pasadena to play in the Rose Bowl, while the Sun Devils will learn on Sunday whether they will play in the Alamo or Holiday Bowl.

Stanford rushed for 239 yards and finished with 516 yards in total offense in winning the Pac-12 title for the second consecutive season.
D.J. Foster scored two touchdowns before leaving the game with a knee injury that appeared to be serious. He would return later in the game but was clearly far from healthy.

Taylor Kelly finished 17-25-173 yards and a score. He would also be the leading rusher, carrying the ball 21 times but was only able to gain 36 yards. He was sacked five times.

The ASU special teams were not very good. Poor punts by Alex Garoutte and a missed field goal by Zane Gonalez hurt ASU in the kicking game. Stanford star Ty Montgomery was once again a pain in the side of ASU, rolling up 29.5 yards per return.

The struggles by Garoutte brought boos from the Arizona State fans in the second quarter, surprising, since Garoutte was replacing Matt Haack.
In two games against Stanford this season, ASU allowed 80 points and over 900 yards in total offense.