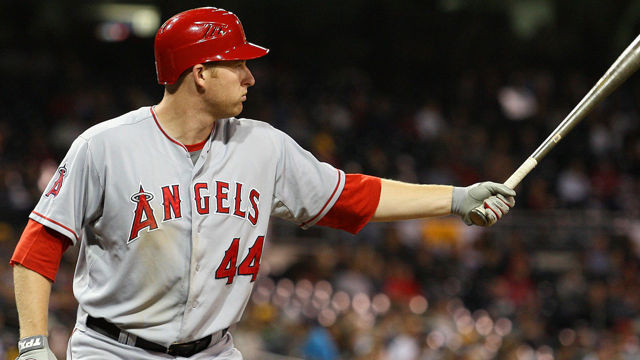 The Diamondbacks wanted a power bat in a corner outfield spot for the upcoming season and on Tuesday that got him.

Mark Trumbo has been traded to Arizona as part of a three-team deal that sent Tyler Skaggs back to the Angels where he was originally drafted in 2009 and also Adam Eaton to the Chicago White Sox.

This will be a tough adjustment for Trumbo as the Angels are all he has ever known. Not just because they are the team he was drafted by and the only organization he has played for, but also because he grew up in Southern California and is a life long Angels fan.

“I am extremely thankful for the opportunity I got,” Trumbo said. “The Angels are the only team Ive ever been with and I couldn’t ask for anything more. Being a lifelong angels fan and getting to play for family and friends is something I wouldn’t trade for the world.”

Now for Trumbo, he comes to the Diamondbacks with set roles that will be important for the team. One is being an everyday left fielder. While with the Angels, he bounced around a lot playing outfield as well as third base and spent some time in the DH spot. One position was never consistent. And that will change now in a Diamondback uniform.

“My entire career I have shifted around a lot,” Trumbo said on tuesday evening. “Ive never really had a spot to call my own. It is materializing that I will be in left field. It will only help me to be a contributor in that part of the game.”

On the offensive side of things, the Diamondbacks add substantial power. Trumbo his 34 home runs in 2013 and drove in 100 runs. Arizona’s outfielders were among worst in the majors in 2013 in home runs as a unit. With Trumbo now bringing his power to the hitter friendly Chase Field, those numbers expect to continue, if not improve.

“I’ve never played a game there but everyone seems to think it is a good hitters park,” Trumbo mentioned. “The ball travels well. For a guy like me thats a huge positive”

Another huge positive for Trumbo will be the opportunity to hit either in front or behind first-baseman Paul Goldschmidt. The Diamondbacks didn’t that power hitter to protect Goldschmidt in the lineup last season and Trumbo is looking forward to having that opportunity.

“I am a huge fan of Paul and the way he plays the game,” stated Trumbo. “He is everything you could ask for. Middle of the order bat, it is a tremendous opportunity for me. I am excited to hit in a lineup with him and all the other guys on the team. I am glad I can be a part of it.”

As part of the Trumbo trade, the Diamondbacks will also receive prospects from the White Sox and Angels. Those players are yet to be officially announced.