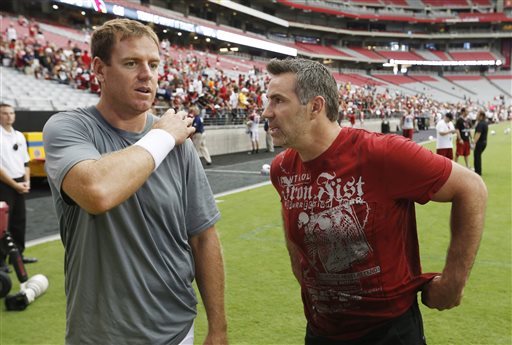 Through 13 games we’ve seen a little bit of everything from Arizona Cardinals quarterback Carson Palmer.

The good, the bad and most recently, the really good.

The 33-year old who came over from the Raiders in the off-season had arguably his best game as a Cardinal Sunday completing 27-32 for 269 yards and a score in a blowout win over the Rams which snapped the Red Birds eight-game NFC West losing streak. He’s thrown 10 touchdowns and just three interceptions in his last five games. It’s also no coincidence the less picks he’s thrown, the more the Cards have won.

Earlier in the season there were whispers about what the best plan of attack would be to replace Palmer via the draft or possibly free-agency if his play and grasp of Bruce Arian’s offense didn’t improve.

“I think it just really depends on where you want to go,” Cardinals legendary quarterback, now NFL Network analyst Kurt Warner told Sports360AZ.com in a phone interview Wednesday morning. “I think he affords you, the way he’s played down the stretch…if there’s a guy there that we really like, that we want to develop, that we think can be our franchise guy. You can go that route if you want to knowing Carson can play a year or two if he continues to play at this level…if there’s not a guy there we feel we can get another one, two, three strong years of out of Carson Palmer and we can wait until we’re in position to get that guy for the future.”

Warner believes Palmer’s early struggles could also be attributed to others around his getting acclimated to the system and the expectations from Arians and his offensive staff.

“He’s been able to get the ball out quicker,” Warner said. “He knows what he wants to do with the football and those [receivers] are making plays for him on top of that…they’ve got a good feel for what they’re doing.”

The Red Birds (8-5) hope the good feel continues this weekend when they travel to Nashville to take on the Tennessee Titans (5-8) Sunday. Arizona trails San Francisco by one game for the final NFC Wildcard spot (9-4).